New Delhi: Just 2.77 percent of India's 1.21 billion people pay personal income tax, official data showed."The number of effective tax payers as on March 31, 2011 was 3,35,79,831 (33.57 Million)," Minister of State for Finance S.S. Palanimanickam said in a written reply to a question in the Rajya Sabha Tuesday.This is just 2.77 percent of over 121 Crore or 1.21 billion population of the country,The amount of direct tax collection rose to

378,063 Crore in the previous year, the minister said.
Source: IANS

It is clear only salary class persons are paying Income tax

In contemporary India, income tax is largely a tax on the middle class salary earner. The poor hardly pays any income tax. The rich have dividends and capital gains as large part of their source of income rather than salaries. We could not believe the finance minister when he mentioned in his last Budget speech that only about 42,800 people have declared taxable income of over Rs. 1 crore annually.

Further, 400,000 people (with incomes more than Rs. 20 lakh, and constituting 1 per cent of the tax-base) account for 63 per cent of the income taxes collected from individuals in an economy with a tax paying base of 3-4 crore people. Thus, 99 per cent of India's taxpaying people are being coerced into filing their tax-returns, while they pay miniscule amounts as tax on some pretext or other. The persons  who pay up are mostly the salaried class, because they can't evade it, as it gets deducted as TDS.


How taxes are collected: 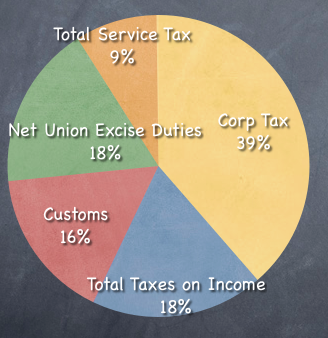 Further the  Fifth Central Pay commission in its report vide para no105.12 has said that  Dearness allowance should be paid free of net taxes as the DA is paid for compensation against price rise. The all allowances should also be paid net of taxes which has been examined by 5th CPC in para no 167. The demand of COC Karnataka was supported by the 5th CPC, that all allowances should not be taxed.

"Accordingly,we recommend  that all the allowances of  Central Government employees, including those of various union territories,  may henceforth  be paid  net of taxes".