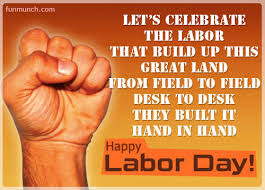 Committee on Allowance submits its Report

The Committee on Allowances headed by Shri Ashok Lavasa, Finance Secretary and Secretary (Expenditure) submitted its Report to the Union Finance Minister Shri Arun Jaitley yesterday; The Report will be now placed before the Empowered Committee of Secretaries (E-CoS) to firm-up the proposal for approval of the Cabinet.

The Committee on Allowances, constituted by the Ministry of Finance, Government of India to examine the 7th CPC recommendations on Allowances, submitted its Report to the Union Finance Minister Shri Arun Jaitley yesterday. The Committee was headed by Shri Ashok Lavasa, Finance Secretary and Secretary (Expenditure),M/o Finance, Government of India and had Secretaries of Home Affairs, Defence, Health & Family Welfare, Personnel & Training, Post and Chairman, Railway Board as its Members and Joint Secretary (Implementation Cell) as its Member Secretary.
The Committee was set-up in pursuance of the Union Cabinet decision on 29.06.2016 when approving the 7th CPC recommendations on pay, pensions and related issues were approved. The decision to set-up the Committee was taken in view of significant changes recommended by the 7th CPC in the allowances structure and a large number of representations received in this regard from various Staff Associations as well as the apprehensions conveyed by various Ministries / Departments. The 7th CPC had recommended that of a total of 196 Allowances, 52 be abolished altogether and 36 be abolished as separate identities by subsuming them in another allowance.
The Committee took note of all the representations received from various stakeholders on the 7th CPC recommendations on Allowances. Representations and demands for modifications were received in respect of 79 allowances which have been examined in detail by the Committee. In doing so, the Committee interacted with all the members of the Standing Committee of National Council (Staff Side), Joint Consultative Machinery (JCM) as well the representatives of various Staff Associations of Railways, Postal employees, Doctors, Nurses, and Department of Atomic Energy. It also interacted with the representatives of the Defence Forces, DGs of Central Armed Police Forces (CAPFs) namely CRPF, CISF, BSF, ITBP, SSB, and Assam Rifles as also senior officers from IB and SPG to understand the viewpoint of their personnel.  As mentioned in the Report, the Committee held a total of 15 meetings and was assisted by a Group of Officers headed by Additional Secretary (D/o Expenditure) in examining the representations.
Based on such extensive stakeholder consultations and detailed examination, the Committee has suggested certain modifications in the 7th CPC recommendations so as to address the concerns of the stakeholders in the context of the rationale behind the recommendations of the 7th CPC as well as other administrative exigencies. Modifications have been suggested in some allowances which are applicable universally to all employees as well as certain other allowances which apply to specific employee categories such as Railway men, Postal employees, Scientists, Defence Forces personnel, Doctors and Nurses etc.
The Report, now being examined in the Department of Expenditure, Ministry of Finance, will be placed before the Empowered Committee of Secretaries (E-CoS) set-up to screen the 7th CPC recommendations and to firm-up the proposal for approval of the Cabinet. It may be recalled that while recommendations of the 7th CPC on pay and pension were implemented with the approval of Cabinet, allowances continue to be paid at old rates. After consideration by the E-CoS, the proposal for implementation of 7th CPC recommendations on Allowances after incorporating the modifications suggested by the Committee on Allowances in its Report shall be placed before the Cabinet for approval.

Pay commission views : Para number 16.3
16.3 The increases in allowances relate to the following:
a) House Rent Allowance (HRA): This accounts for the principal increase in the
expenditure on allowances since it is calculated as a percentage of the basic pay and the rise in basic pay based on recommendations of the Commission would be reflected as increased HRA. The expenditure on account of HRA is likely to go up from ₹12,400 crore to ₹29,600 crore, an increase of ₹17,200 (138.71%). This figure also includes an expenditure of ₹3,700 crore that is likely to occur on account of the expansion in coverage of HRA benefiting personnel serving in the CAPFs (this figures include all Central Government employees including Defence employees) 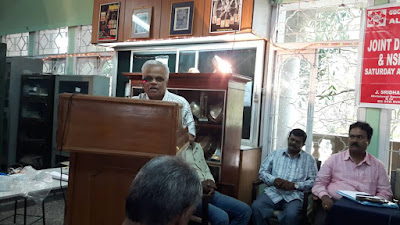 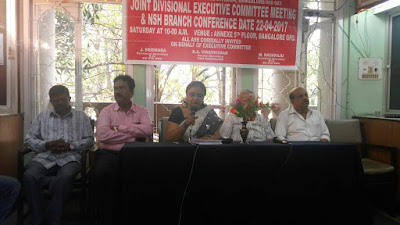 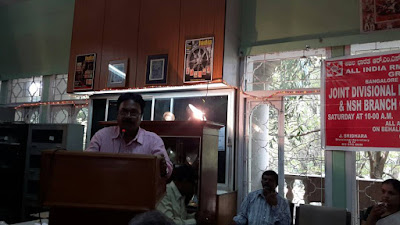 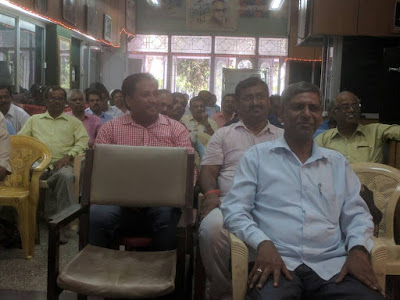 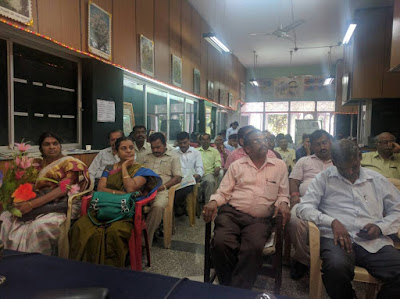 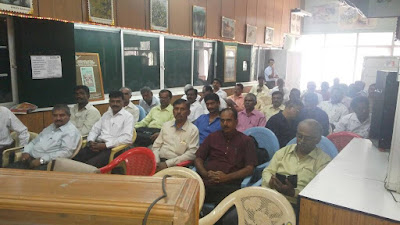 Comrades,
The allowances committee report is likely to submit its final report to the Honourable Finance Minister only by early next week, there after the report shall be placed for cabinet approval , the whole process may take another 15 days.

CLARIFICATION REGARDING ADMISSIBILITY OF FLEXI-FARE IN SHATABDI/RAJDHANI/ DURONTO TRAINS WHILE AVAILING LTC.

As per Railway Board's Circular No. 46 of 2016 dated 07.09.2016, Ministry of Railways have introduced a flexi-fare system in Rajdhani/Shatabdi/Duronto trains, where the base fares will increase by 10% with every 10% of berths sold subject to a prescribed ceiling limit. In this regard, this Department is in receipt of references from various segments seeking clarification on the issue of admissibility of flexi-fare while booking the tickets of these trains for the purpose of LTC.

2. The matter has been examined in consultation with Department of Expenditure, Ministry of Finance and it has been decided that flexi fare (dynamic fare) applicable in Rajdhani/Shatabdi/Duronto trains shall be admissible for the journey(s) performed by these trains on LTC. This dynamic fare component shall not be admissible in cases where a non entitled Government servant travels by air and claims reimbursement for the entitled class of Rajdhani/Shatabdi/Duronto trains. Such Government servants will get reimbursement of fare after deducting the dynamic fare component. 3. The above decision shall be applicable retrospectively with effect from 9th September, 2016, i.e. the date from which flexi-fare system was introduced by Railways. 4.

Hindi version will follow. \\19171kA-0-
(Surya arayan ha)
Under Secretary to the Government of India

Meeting Of the Standing Committee of National Council (JCM)

F.No. 3/3/2016-JCA (Pt)
Government Of India
Ministry of Personnel, PG & Pensions
Department of Personnel & Training
Establishment (JCA-2) Section
North Block, New Delhi Dated: 11th April, 2017
OFFICE MEMORANDUM
Subject: Meeting Of the Standing Committee of National Council (JCM) – reg
The undersigned is directed to say that the meeting of Standing Committee has been scheduled to be held on 3/5/2017 (Wednesday) under the Chairmanship of Secretary (P) to discuss the agenda item received from Secretary, Staff Side (NC-JCM), at 3.00p.m, in Room No. 119, South Block, New Delhi.

View the Charter of Demands suggested by COC Karnataka;

NATIONWIDE DEMONSTRATION AT ALL IMPORTANT CENTRES ON SAME DAY

MORE THAN 2000 CENTRAL GOVERNMENT EMPLOYEES AND PENSIONERS WILL PARTICIPATE IN THE PROTEST DHARNA.

Demanding Honoring of assurance given by Group of Ministers including Finance Minister, settle the charter of demands submitted by Confederation, increase minimum pay and fitment formula, payment of revised allowances including HRA w.e.f 01.01.2016, implementation of option – I pension parity recommended by 7th CPC, Scrap New Contributory Pension Scheme and bring all employees appointed after 01.01.2004 under the purview of CCS (Pension) Rules 1972, Grant Civil Servant Status and revise the wages and allowances of Gramin Dak Sevaks, regularise all casual and contract workers, Revise pension of autonomous body pensioners and grant dearness relief due from 01.07.2016, withdraw “Very good” bench mark condition for MACP etc.

IN FRONT OF MAJOR CENTRAL GOVERNMENT OFFICES AT ALL IMPORTANT CENTRES THROUGHOUT THE COUNTRY DURING LUNCH HOUR
ON 22.06.2017 (THURSDAY)

All affiliated organisations and COCs are requested to mobilise maximum number of employees & pensioners in the above two programmes. Detailed circular will be issued shortly
Posted by Karnataka COC- Central Government Employees News at Thursday, April 13, 2017 1 comment:

Comrades,
The well attended meeting of the COC Karnataka was held on 6th April 2017 at ITEF Room Bangalore under the chairmanship of Com S. Radhakrishna  President COC Karnataka.

Com Radhakrishna  welcomed the members for the meeting , he congratulated the members  for the historic 16th March   strike of CG employees , it is against the policy of the Central Government which is anti-employees, the issues of NPS , Pension , Allowances , Fitment formula and Minimum wage revision has not been resolved so far.   He also said the policy of outsourcing the Government jobs should be stopped and filling up of vacant post are to be taken up on priority basis.  He also informed that large section of pensioners participated in the rally held on Freedom Park on 16thMarch 2017. This is a good sign.

Com P.S.Prasad General Secretary he welcomed the members for the meeting , he congratulated the members  for the historic 16th March   strike of CG employees, this strike is proved the anger of CG employees in non-fulfilment of promises made by Group of Ministers  regarding Fitment formula enhancement and Minimum wage revision, settlement of Allowances, NPS and Pension issues.

Regarding allowances it was pointed out every member is demanding its early implementation, it will be brought to the notice of the CHQ and the meeting hoped the issue of allowances shall be resolved shortly.

The meeting discussed the 9th State Level Conference of the Confederation of Central Government Employees and Workers Karnataka State issue.

The following decisions taken place.
1)    It was decided to hold the 9th State Level Conference of the Confederation of Central Government Employees and Workers Karnataka State at Income tax office on 1st June 2017 .

3)    The 9th State Level Conference will be addressed by both the Secretary General and President of Confederation.

4)    Regarding district representation for the conference  , two delegates from each districts shall participate in the conference, the accommodation for one day shall be provided .

5)    The accommodation for out station delegates  shall be provided at the cost of Rs 150 per delegate for one day.

6)    The total cost of  Rs 70,000/ is anticipated for the conference ,  additional funds to be collected from the affiliates, Com Mohan Pai from Census has assured an amount of Rs 10,000/ and ITEF will provide an amount of Rs 5,000/.  Each affiliate of COC Karnataka shall pay special funds @ Rs 5 / per member .

7)    The election of office bearers shall be held on the basis of  nomination from  the respective affiliates, only the post of General Secretary , President shall be decided in the  conference  with due consultation with affiliates. The women subcommittee shall be formed , each affiliates shall also nominate women committee members.

8)    The affiliates of COC Karnataka shall clear the subscription dues for the year 2016-17 by this month.

9)    The draft GS report and Accounts was circulated any modifications and additional information especially on department issues should be supplied for incorporation in the report.

The Com A.Srinivas  Postal  JCA convenor spoke and he informed that the strike of 16th March  was a success , but more efforts should be made to make this strike a success .  The weakness of the affiliates should also be highlighted, so that corrective measurers can be taken.  He also said importance on filling of vacant post should be taken up and stopping of privatisation of Government work.

The next meeting of COC Karnataka shall be held on 17th May 2017.

Conclusive meeting of the Committee on Allowances held on 6th April, 2017

NEW DELHI: The Supreme Court refused on Friday to entertain a PIL that alleged that political organisations were resorting to hartals to hoodwink repeated judicial pronouncements banning strike and bandh calls, which paralysed normal life.


Having failed to convince the bench to entertain the PIL, the petitioner decided to withdraw the plea.

Courts have ruled on strike, bandh and hartal calls given by political outfits for two decades now. The Kerala high court in Bharat Kumar case in 1997 had said, "When properly understood, the calling of a bandh entails the restriction of free movement of the citizen and his right to carry on his avocation and if the legislature does not make any law either prohibiting it or curtailing it or regulating it, we think that it is the duty of the court to step in to protect the rights of the citizen so as to ensure that the freedom." An SC bench headed by then Chief Justice J S Verma had upheld this order.
Posted by Karnataka COC- Central Government Employees News at Saturday, April 01, 2017 4 comments: