March to Parilament on PFRDA 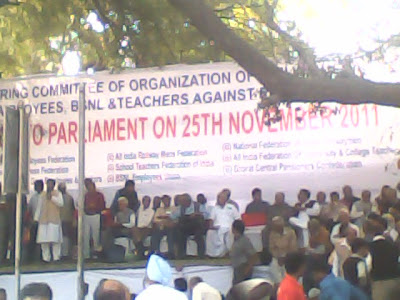 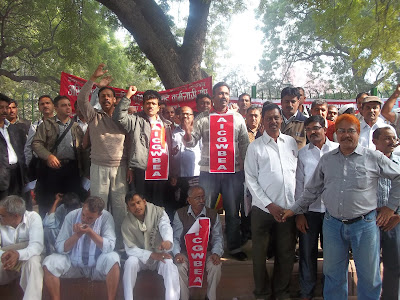 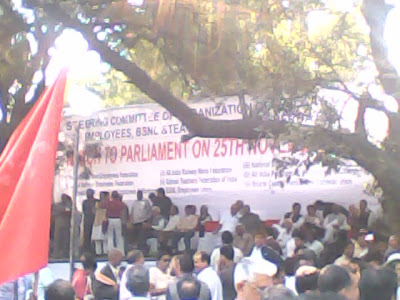 Overall the performance of the participation of Employees Karnataka State was commendable, 300 Teachers from different parts of the state , 150 from SWRMU, 150 from Okkutta , 50 from Confederation(ITEF, AG'S, Postal Accounts, Ground Water, NFPE PIV) participated, The quota allocated by Confederation was achieved, Red salute to all comrades who participated in the March to Parliament on PFRDA

The petition to the Prime minister elaborated the various reasons as to why the present bill will be neither in the interest of the employees nor will benefit the Government Exchequer (Copy enclosed).

The Hon'ble Prime Minister assured the delegation of the consideration of the petition and the feasibility of providing a guarantee for a minimum pension which the Standing Committee had recommended but unfortunately not found approval of the Cabinet. The Prime Minister informed the delegation that his Government would not do anything to harm the interest of the employees.

The rally was concluded at 2.30 PM. On behalf of the Steering Committee, Com. Vyas announced that the employees will organize two hour walk out on the next day the Parliament takes up the PFRDA Bill for consideration

March to Parliament on PFRDA :

March to Parliament on PFRDA : Assemble at Jantar Mantar in New Delhi at 10 am. on Nov 25th 2011
Posted by Karnataka COC- Central Government Employees News at Tuesday, November 22, 2011 No comments:

NEW DELHI: The government today approved amendments to the PFRDA Bill 2011 while agreeing to the proposed 26 per cent foreign investment in thepension sector but refrained from providing assured returns to subscribers in the proposed law.

The government had decided not to mention FDI capin the legislation itself for retaining the flexibility of changing it through an executive order. The 26 per cent FDI cap is to be mentioned in the regulations to the legislation.

The changes to the PFRDA Bill were approved by the Union Cabinet at its meeting here.

The Bill, which has already been scrutinised by the Parliamentary Standing Committee on Finance, is likely to be taken up for consideration and passage in the Winter Session beginning November 22.

"The government is of the view that FDI cap in the pension should be at 26 per cent at par with the insurance sector. However, it would like to retain the flexibility of changing the cap of FDI as and when required and that is why it has not been kept as part of the bill", an official spokesperson said.

The proposed legislation, the official said, will not provide assured returns to the subscribers of pension schemes.

The Committee, which is headed by senior BJP leader and former Finance Minister Yashwant Sinha, wanted the government to specify the FDI cap in the legislation itself and provide minimum guaranteed return to subscribers.
Posted by Karnataka COC- Central Government Employees News at Wednesday, November 16, 2011 No comments:

Sub:- Revision of PPOs of pre—2006 family pensioners — regarding.

ALL INDIA SATHYAGRAHA ON 8TH NOVEMBER 2011

Central Trade Unions and other organizations like Bank , Insurance , BSNl State and Central Government Employees are joining on a single platform to demand.

Program on 8/11/11 at 10 am at Mysore Bank Circle
join enmass
Posted by Karnataka COC- Central Government Employees News at Friday, November 04, 2011 No comments: