Comrade,
The COC Karnataka meeting will be held on 3rd  September 2014 at city RMS office Bangalore at 6.30 pm to discuss the following issues.
1) The review of the  meeting with Chairman and Members of the  7th CPC.
2) Conducting of the Dharna
Demands of Dharna:
Interim Relief, DA merger and GDS issues.

c) 25th September 2014:   Dharna between 10 AM to 3 PM at New Delhi with participation of the leaders of all affiliates and the members.

I thank you for your co-operation extended to COC Karnataka and trust imposed on me, from past one year we were preparing for the 7th CPC memorandum under the guidance of  Com S.Radhakrishna  President  COC Karnataka and Com Muthukumar Adviser  COC Karnataka and points for discussion, we had a nice meeting with the 7th CPC on 24th August 2014 for about 50 minutes at Bangalore , even though other association were given time for about just 10-15 minutes. the highlights were published in COC website and Confederation CHQ website also.

On this occasion I thank the CHQ of Confederation for providing us the opportunity to meet the 7th CPC members and further explaining the things, The Chairman of the 7th CPC has also appreciated the presentation of the COC Karnataka and Pensioner Association.   We have taken up many important issues of the CG employees, since there was limited time allocated to us , we could not present all the demands of CG employees.  We hope through the commission visit to other  states these other  issues will be taken up and also Confederation CHQ and Staff side of JCM have  already taken up vital issues of  DA merger and IR. these issues with the Central Government and the 7th CPC.
Meanwhile we have to build pressure on the Central Government to  see that  the  justified demands of Central Government Employees are accepted , hence  we should be more alert and follow the directions of the CHQ in this aspect.
I request you all to attend COC Meeting on 3rd  September 2014 at City RMS office and also give directions to district units to observe the said programs.

The Staff Side of National Council (JCM) , had raised the issue regarding payment of interim relief and merger of dearness allowance with pay , as an Agenda Item of the Standing Committee of National Council (JCM ) in its meeting held on 7th May, 2014.
After detailed deliberations , it was stated by the Secretary (Expenditure), Ministry of Finance on this item that since the terms of reference enables the 7th CPC to send Interim Report , as such, the Staff Side might approach the Pay Commission for a report on Interim Relief and Merger of Dearness Allowance, as recorded in the Record Note of meeting, forwarded to Staff Side vide Director(JCA), Government of India, Ministry of Personnel, Public Grievances and Pensioners , Department of Pension and Pensioner’s Welfare ‘s letter No. 3/9/2014/JCA dt.24/7/2014.

We, therefore, humbly request you to kindly favourably consider our demand of payment of Interim Relief and Merger of Dearness Allowance with pay as Dearness Allowance, has since crossed the value of 100% on 1st January, 2014 and a number of Government Employees are superannuating every month,who would be deprived of the benefit of the same. 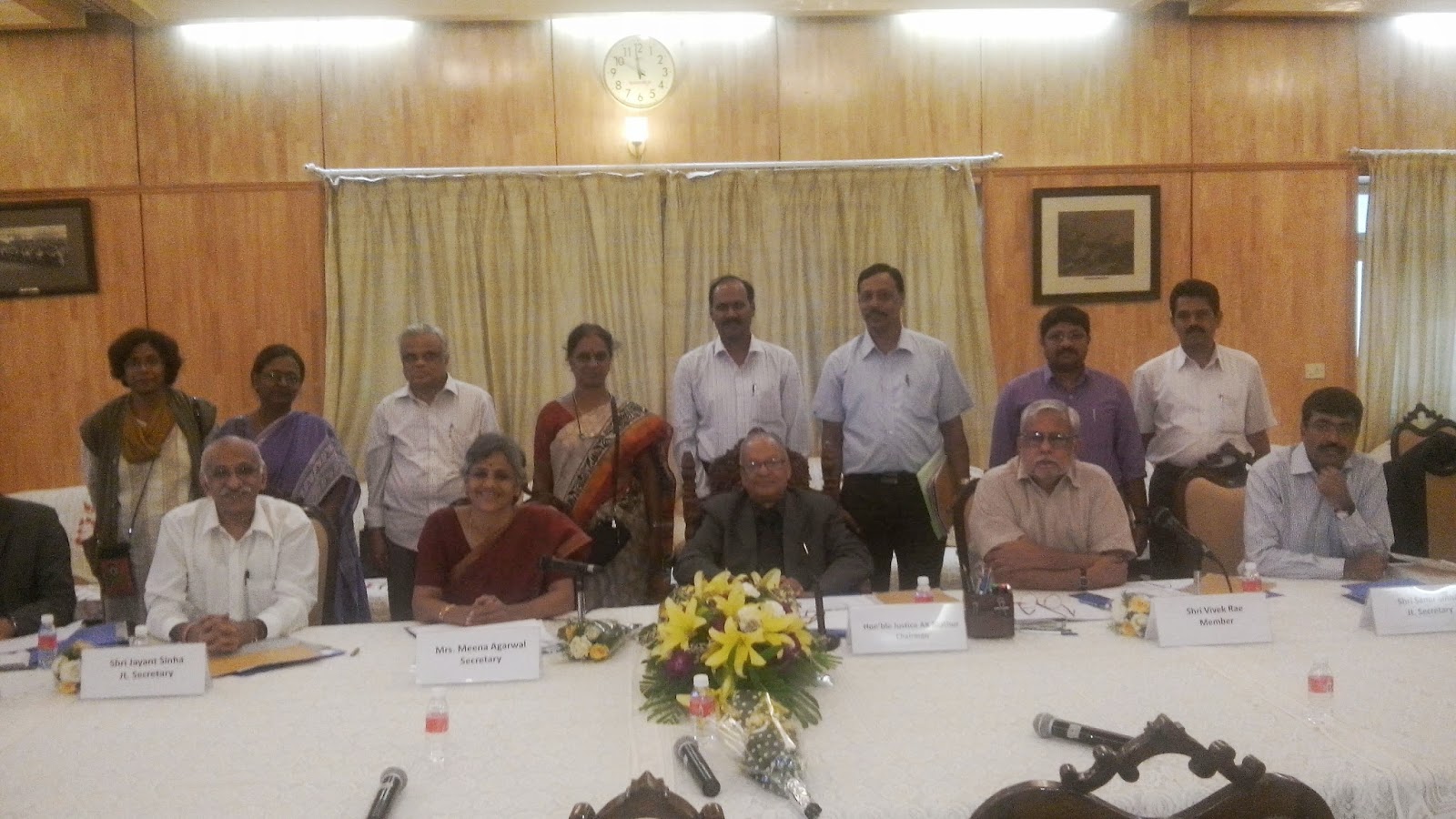 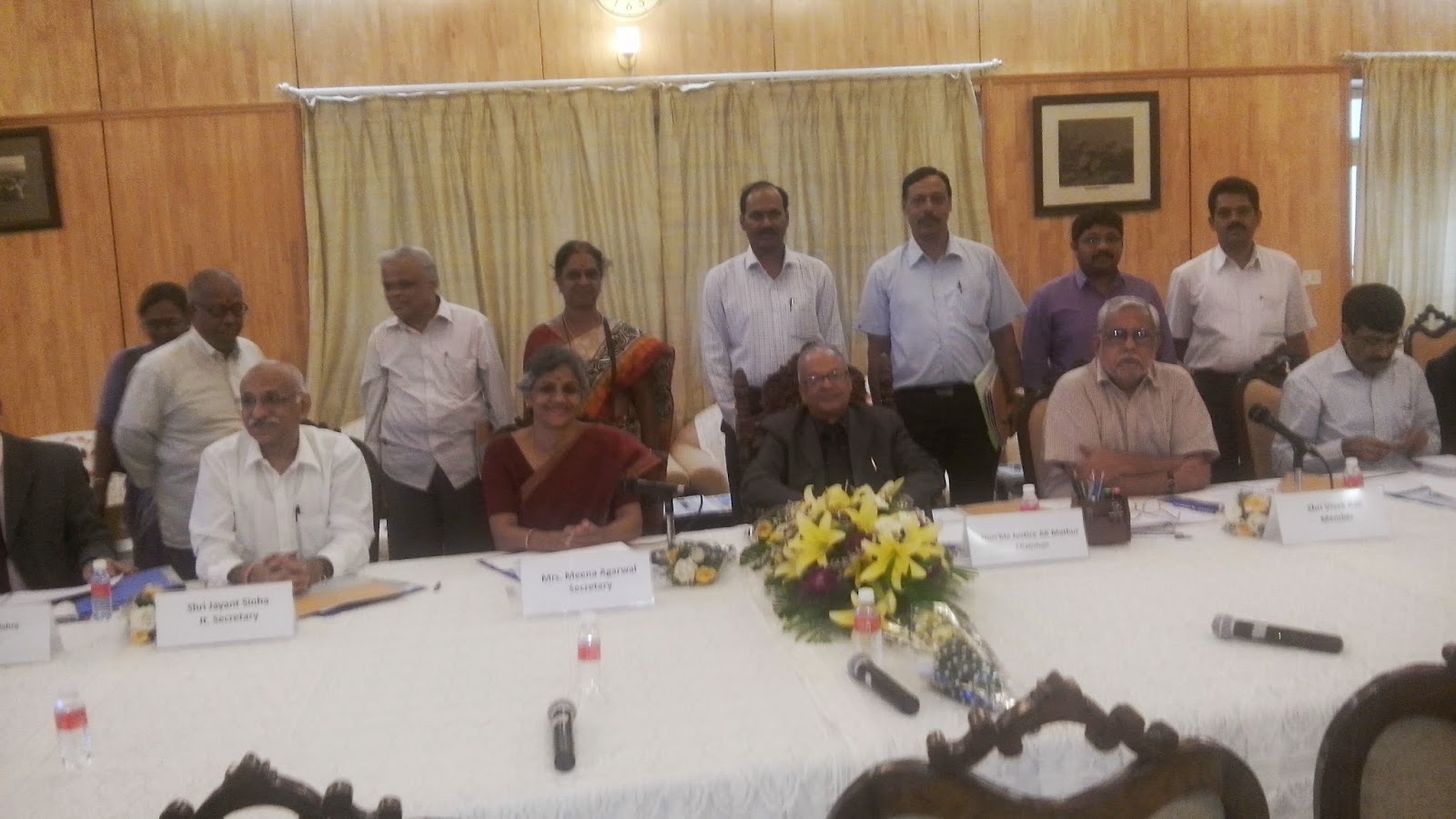 The meeting with CHAIRMAN AND MEMBERS of 7th Central Pay Commission was held at Bangalore 0n 24th August 2014 for about 50 minutes. Overall the meeting was on positive note.

It was brought to the notice of the commission that to attract higher talent to Central Government higher pay scales should be given.
(The commission was of the view that people choose their career on various aspects including wages.  Wages of Government employees cannot be compared with private sector.   It was pointed out by us that though the wages cannot be compared with private sector there is a need to keep the wages in central government that people will continue in government after joining.  Chairman assured to examine this aspect)
EQUAL PAY FOR EQUAL WORK

It was brought to the notice of the commission that in respect EQUAL PAY FOR EQUAL WORK
a)      For the same post which include similar duties and responsibility, there are different pay scales/ Grade Pay existing for same nature of duties and similar recruit qualifications.
b)      Grant of Grade Pay Rs.4800 to all Supervisors cadre.
c)      The gazetted Group “B” post be  started  from Rs 5400/- GP.
d)      LDC pay scales should be provided with Grade Pay of Rs.2400 as their minimum qualifications is 12th std.
e)      There should not be any discrimination in the Pay scales of CSSS Cadre and Subordinate Departments since the nature of work being carried out by them is similar. Hence, disparity is to be removed.
f)        The Drivers of Subordinate offices  be placed with starting pay of Rs 2400/ GP as in Lok Sabha Secretariat.
g)      Graded structure for MTS should also be recommended as the 5th CPC vide para no 53.13 had recommended graded structure for these MTS.
h)      Pay scales of Stores wing persons be upgraded considering their work load and level of responsibility.
i)        Provide additional increment w.e.f. 01.01.2006 to staff working in old pay scale Rs.7450-11500 as in case of Inspectors of Central Excise and Income tax departments.

(The commission positively agreed to consider this suggestion except Drivers case.)

It was brought to the notice of the commission that on Increment rate of 5% and Promotion policy.

a)      As the Government employee put more and more service, he will be more trained to perform his duties in a better befitting manner. Thus the Government is more beneficial as good quality of work can be expected from an experienced official.
b)      His family responsibility will increase with age.
c)      They has to educate the children in professional courses, marriage of his children has to be performed, his medical expenses will also increase.
d)      There should be adequate financial protection for him, the better rate of increment should motivate him to work more.
e)      The person joining a Central Government Service is not just for the employment is for a whole career.
f)       On promotion one shall get two additional increments subject to an minimum salary increase of Rs 3000/- per month as he will perform higher duties and responsibility's.
g)      He shall get not less than five financial up gradations in promotional hierarchy during his service to motivate him to work more.
h)      Similarly the scientist are provided to FCS and get promotions every 4 years.

(The commission positively agreed to consider this  suggestion.)

Allowances:
It was brought to the notice of the commission that on Allowances
a)      All allowances such as HRA, Tour DA, CEA (tuition fees) , Cashier Allowances, etc. should be increased by four times.
b)      OTA & Night Duty to be paid on par with Railways .
c)      When ever there is an increase in Dearness Allowance, the above  allowances be also increase as in the case of Transport allowance.

It was brought to the notice of the commission that on Transport allowance
a)      The  field oriented organizations like CGWB, Survey Of India, GSI, IBM, IMD, etc. most of the categories remain in fields, even Postal Employees and AG's Employees  are effected.
b)      Now the field going staff are deprived of earlier CCA and present Transport Allowance as they cannot fulfill the condition of at least one day stay in a month in head quarters.
c)      This condition of being present at Hqrs. Office at least a day in a calendar month becoming eligible for transport Allowances should be removed.

Taxes:
It was brought to the notice of the commission that on taxes:
a)      The  Fifth Central Pay commission in its report vide para no105.12 has said that  Dearness allowance  be paid free of net taxes as the DA is paid for compensation against price rise. All other allowances should also be paid net of taxes which has been examined by 5th CPC in para no 167.
(The commission agreed to examine this suggestion.)
Health Care system:

It was brought to the notice of the commission that on Health Care system
a)      More CGHS hospitals should be made available or alternatively the person should have the option to choose any of the hospitals of his choice and the bill to be passed with AIMS rates.
b)      Existing CGHS system needs improvement.
c)      Proper ward entitlement should be made as per grades.
d)      Cash less facility for hospitalization.
e)      Autonomous  bodies shall also be included in CGHS

(The commission to examine this suggestion, but not satisfied with demand of Cash less facility for hospitalization.)

It was brought to the notice of the commission that on following issues.
Other points:

a)      Central Government Strength.
b)      Non-filling up of vacant posts has resulted in increased work load on the existing employees.
c)      Lower Spending by Central Government on its Employees.
d)      Leave / Holidays.
e)      12 days Casual Leave.
f)       Restrictions EL of  300 days to be removed.
g)      The PSU are providing reward medals after 15 years, 25 years and end of service, similarly such reward should be provided to Central Government Employees.
h)      In case of death of Government Servant during while on duties, his family members should get compassionate  appointment not considering restrictions of 5%.
i)        Education Loan should be provided.


Simplification of pension procedure-submission of undertaking by retiring Government servant along with pension papers:

MINUTES OF THE COMMITTEE MEETING OF THE CONFEDERATION OF CENTRAL GOVERNMENT EMPLOYEES AND WORKERS KARNATAKA STATE
Held on 12.08.2014 at Income Tax Office, Queens Road, Bangalore.

Agenda:
1.       7th CPC developments.
2.        Visit of 7th CPC’s Chairman to Bangalore.
3.        West Bengal protest day on 27th August 2014.
4.       Bank Authorisation.
5.       COC Funds
6.       JCM agenda points
7.       Formation of District COC
7th CPC developments:
The COC Karnataka express sincere gratitude towards the CHQ of  the Confederation for considering the COC Karnataka views for the 7th CPC memorandum. The majority COC Karnataka views has been accepted and reproduced in the 7th CPC memorandum.
The committee for preparation of memorandum to 7th CPC headed by Com.P.S.Prasad has done a commendable job.  The efforts of this committee especially the initiative taken by Com P.S.Prasad is appreciated in the COC meeting.

It is proposed to place before the Pay Commission that the DA to the Central Government Employees should be equal irrespective of their Basic Pay.  Since the DA is to compensate for the price raise which is common to all in the market.
West Bengal protest day on 27th August 2014:
The assault/attack by some political party leaders in West Bengal on our Central Government Employees of the West Bengal is condemned and expressed solidarity to the leaders of COC West Bengal. It was resolved that in all Central Govt.  offices  protest lunch hour demonstration should b e held on 27th August 2014 as a mark of protest and saving gram should be sent to Chief minister of West Bengal.

Bank Authorization:
It was decided that Com P.S.Prasad General Secretary and  Com Dominic VijayAnand Finance Secretary will jointly operate the COC bank accounts which is at AG's Bank.

General Secretary requested all the affiliatesto immediately remit the COC funds @ Rs 5 per member  to  Com Dominic VijayAnand Finance Secretary who is at GPO 3rd Floor Bangalore his contact number is  9480069255 or at Current  Account number 47 at AG's Bank.
JCM agenda points:
The Com P.S.Prasad General Secretary briefed the members in respect of the agenda points which was accepted and to be sent to CHQ for need full.

Formation of District COC:
It was decided to further strengthen the District COC where it is in active and both NFPE and ITEF will issue circulars and guidelines to the district units.