The Hon’able Finance Minister in the parliament on 29th Feb 2016 has stated that the next financial year 2016-17 will cast an additional burden on account of the recommendations of the 7th Central Pay Commission and the implementation of Defence OROP.

Let us examine the last year spending on various ministries 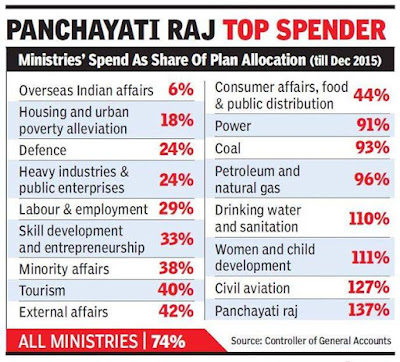 This clearly shows many ministries have not spent the money allocated, this due to mainly the shortage of talented staff and various policies’ of the Government.

Today, the weakest link in respect of any government policy is at the delivery stage. This phenomenon is not endemic to India. Internationally also, there is an increasing emphasis on strengthening the delivery lines and decentralization with greater role being assigned at delivery points, which actually determines the benefit that the common citizen is going to derive out of any policy initiative of the government.

More the talented persons are there in Government services, more the delivery of the government schemes will be there, thus the Government machinery will be more effective and common man will benefit a lot.

The 7th CPC has not improved the service condition of the Central Government employees, it has provided just 14.3 % wage hike against the staff side demand of more than 70% wage hike.
The person joining a Government Service is not just for the employment is for a whole career, if a person joins a Government Service he will quit/ retire from the job only after putting 30 years service or more.  In case of the person joining a private company he will jump from one company to another at least five times in thirty years.

Non-filling up of vacant posts has resulted in increased work load on the existing employees and delivery of the Government schemes.

JCA meeting at Belgavi on 26th Feb 2016 at SWRMU office 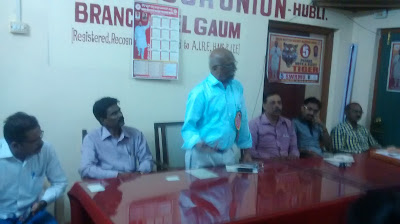 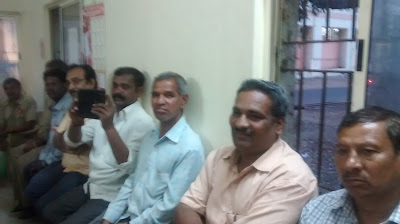 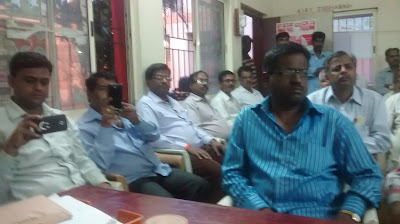 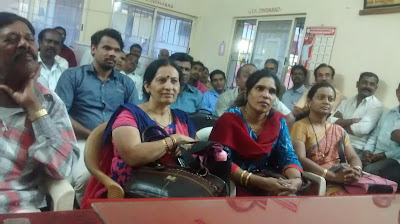 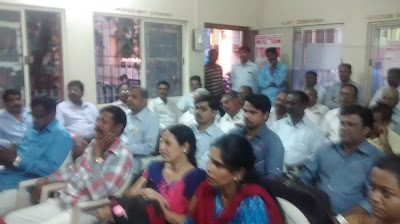 
For the year 2016-17, we expect an Operating Ratio of 92%, after including the immediate impact of the 7th Pay Commission, as against 90% likely to be achieved in the current year.

Implementation of Recommendation of 7th CPC- Minutes of the Meeting of Joint Secretary (IC) with the Members of the Staff-Side of the Standing Committee (National Council-JCM) held on 19.02.2016

List of Nodal Officers for implementation of 7th CPC recommendations

Sub: Brief of the NJCA meeting held on 19.02.2016 with the Convener, Implementation Cell, Ministry of Finance   (Government of India), reg. 7th CPC recommendations and Charter of Demands of the NJCA

A meeting of the NJCA held today with the Convener, Implementation Cell, Ministry of Finance, Shri R.K. Chaturvedi, wherein we discussed and emphasized on all the 26-point Charter of Demands of the NJCA send to the Cabinet Secretary on 10.12.2015.

We agitated the issues of NPS, Minimum Wage, Multiplying Factor, deduction of HRA and all other important issues.

Let us not leave any stone unturned for preparations of the strike.
With best wishes
(Shiva Gopal Mishra)
Convenor 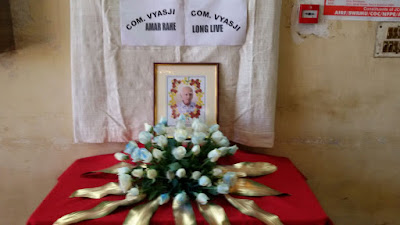 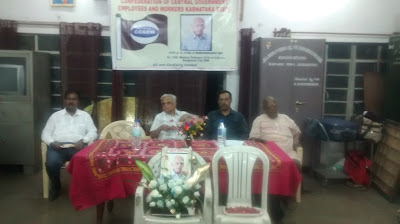 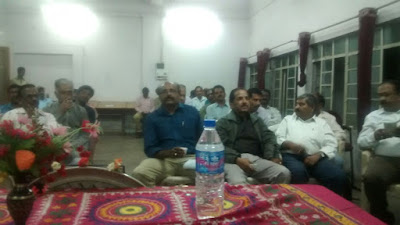 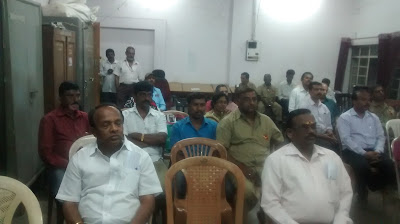 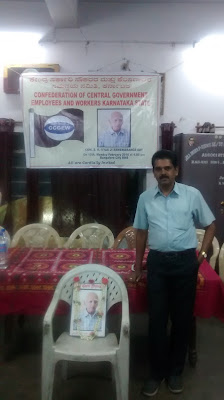 All affiliates
COC Karnataka
Comrade,
The meeting of the COC Karnataka is being held on Monday the 15th Feb 2016 at 6.30 pm at city RMS office Bangalore. To discuss the following issues.

3) Out come of National Executive of the Confederation of Central Govt. Employees & Workers to be held at ITEF Head Quarters , New Delhi on 12-02-2016.

All affiliates of COC Karnataka are requested to attend the said meeting 15th Feb 2016 at 6.30 pm at city RMS office Bangalore without fail.

Strike notice to be served on 11th March 2016 and indefinite strike of Central Government employees from 11th April onwards. More details to follow.

CHARTER OF DEMANDS
1. To improve Minimum Wage of Rs.18,000/- and multiplying factor. Reject all the retrograde recommendations of the VII CPC.

2. Scrap National Pension Scheme(NPS) and restore Old Pension Scheme for all those who appointed on or after 01.01.2004.3. Settle 36-point Charter of Demands, include reduction in duty hours, removal of anomalies of 6th CPC, removal of ceiling of Rs.3500 for PLB, grievances of different categories of railwaymen, improvement in the medical facilities, railway quarters etc. etc., already submitted to Ministry of Railways by the AIRF in December, 2013(on which strike ballot was conducted on 20th and 21st December, 2013).4. Scrap Report of Bibek Deb Roy Committee and implement positive recommendations of D.P. Tripathi Committee.5. Re-call the Notification issued by the Government of India on 22nd August, 2014 in the matter of 100% FDI in Construction, Operation and Maintenance of Indian Railways and to scrap all the agreements entered with the Foreign/National Companies in detriment to the interest of the Indian Railways and the country as a whole.6. Stop all anti-workers amendments in the labour-laws.7. Injustice done with the Technicians, Technical Supervisors(Engineers), Loco & Traffic Running Staff, Operating and Medical Categories Staff, etc. etc. in respect of allotment of Pay Matrix and promotions also should be done away with and justice be administered.8. Parity in pay structure and promotional scope for Common Categories with those working in the Central Secretariat/Ministries should be ensured.9. Retain all the existing allowances and advances.10-A. Constitute Joint Committee at each Ministry/Department level to resolve VII CPC anomalies, aberrations and injustice within a time frame manner, and powers for the same should be delegated to the Ministries to resolve their issues at the Ministry level. 10-B. Set-up National Joint Committee to discuss and resolve all VII CPC anomalies, aberrations and injustice within a time frame. 11. Ensure payment of arrear for PLB as per amendment in the Bonus Act, as was done in the year 2008. The All India Railwaymen’s Federation gives a clarion call to all railwaymen irrespective of their affiliation to any organization to participate in the Strike Ballot and exercise opinion in this regard.


Budget for the next fiscal needs to provide Rs 1.10 lakh crore for implementing the OROP and 7th Pay Commission award, besides a higher allocation for the farm sector, Finance Minister Shri Arun Jaitley said today.

Addressing the Consultative Committee attached to the Finance Ministry, he also said that India has potential to grow at a much faster pace even as he exuded confidence that fiscal deficit target for current financial year will be within target.

"During the financial year 2016-17, the central government has to make provision for about Rs 1.10 lakh crore in order to meet the liabilities on account of implementation of 7th Pay Commission recommendations and One Rank One Pension (OROP) Scheme," Finance Minister Shri Arun Jaitley said.

Minutes of the Meeting of Joint Secretary(IC) with Nodal Officers held on 2nd Feb, 2016

The Government of India had taken the historic decision to implement OROP in November, 2015. This fulfilled the long standing demand of the Defence Forces personnel after 42 years and benefited over 18 lakh ex-servicemen and war widows.

In pursuance of the order issued on 07/11/2015, detailed instructions alongwith OROP Tables have been issued today.

• The annual recurring financial implication on account of implementation of OROP at the current rate will be approximately Rs. 7500 crore.

• 86 percent of the total expenditure on account of OROP will benefit the JCOs/ORs.

• Payment of arrears and revision of pension under OROP is to be made by the Pension Disbursing Authorities in four installments, except for family pensioners and pensioners in receipt of gallantry awards who will be paid arrears in one installment.

Amid global uncertainty, Finance Minister Arun Jaitley today said it is important for India to emerge out of the crisis stronger as it is on a much higher and stabler footing than other nations.

"Unpredictability and volatility have become the new global norm. In these circumstances, it is extremely important for India to emerge and emerge out of the crisis even stronger," he said while addressing the Invest Karnataka 2016 summit here.

Jaitley said that India is "relatively unimpacted" by some of the factors that have caused the global crisis. "Lower prices of oil and metal commodities substantially suit us. It indirectly impacts us because it shrinks our exports; it makes our markets more volatile, currency more volatile. But compared to the rest of the world, we are still on a much higher and stabler footing," he said

You can find the  the government finances is in good shape
Posted by Karnataka COC- Central Government Employees News at Wednesday, February 03, 2016 No comments: