The All-India CPI-IW for June, 2020 increased by 2 points and stood at 332 (three hundred and thirty two)
DA as on 1st July is 24.94
Posted by Karnataka COC- Central Government Employees News at Tuesday, August 04, 2020 No comments: 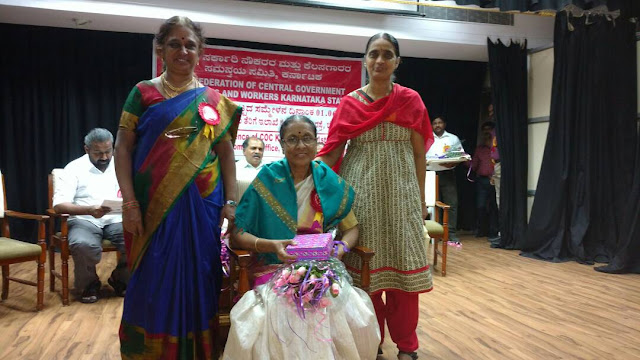 Com. R. Seethalakshmi, Ex General Secretary AIPEU Postmen/MTS , ex Vice President COC Karnataka,  ex All India NFPE leader, She held various positions including  the  Society Director.  She was a fire brand women leader working for the  working class,  expired today evening.  May her soul rest in peace.
Com. R. Seethalakshmi the first woman General Secretary among all affiliated unions of NFPE, elected in 25th All India Conference held at Cuttack (Odisha) 29th to 31st December 2013 succeeded by 26th AIC held at Ujjain during Jan-2015. Her services rendered to Confederation of Central Govt. Employees,  Deputy Secretary General-NFPE, All India Women Employees Associations and various organizations in Karnataka are very much appreciable.
As a strong follower of Com. Adi and followed his foot-steps with all loyalty, commitment and dedication and continued the same throughout the career.
Started her career as GDS (EDA), promoted as Post-women and working in Bangalore City MDG, Bg West Division, Bangalore and retired as post-women. She is familiar with 5 languages and can make oration fluently.
Even after her  retirement  she continued to work for the working class with all her cheerful appearance and smiling always remains in the hearts of many and many people all over India, particularly, in Postal department.
The COC Karnataka remembering her valuable contribution towards the working class dips the flag in her remembrance.
Posted by Karnataka COC- Central Government Employees News at Saturday, August 01, 2020 No comments: