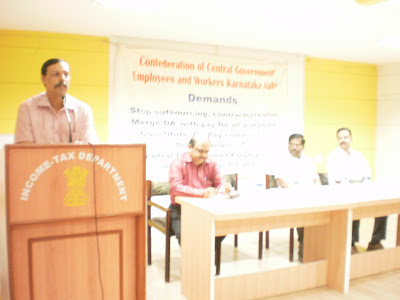 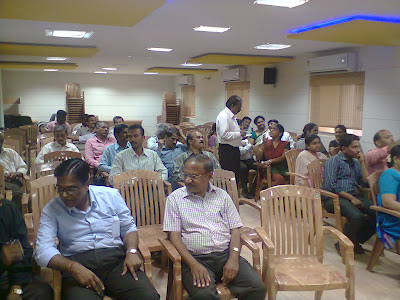 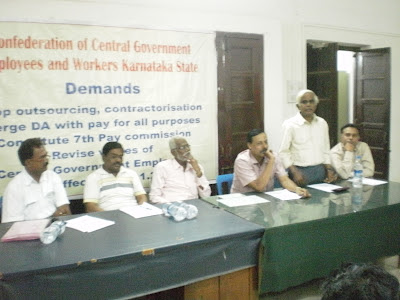 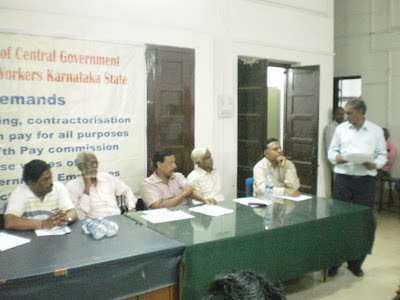 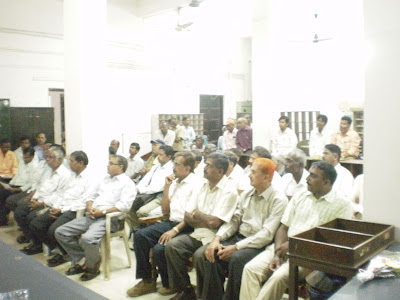 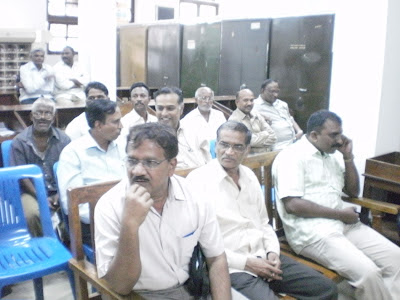 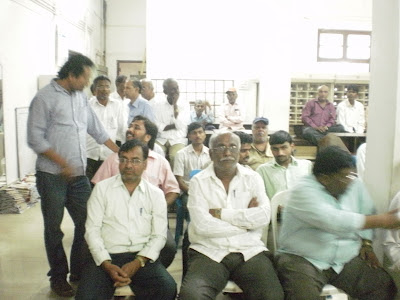 Meeting of the National Anomaly Committee

The 5th Meeting of the National Anomaly Committee will be held on  17th July, 2012 at 3.00 PM at Committee Room No.119, North Block, New Delhi
Posted by Karnataka COC- Central Government Employees News at Saturday, June 23, 2012 No comments:

The COC convention on 14 charter of demands will be held   at Hubli city on Friday the  29th June 2012  at 6pm at Head Post Office  Hubli . Make this Convention a success

MARCH TO PARLIAMENT ON 26TH JULY 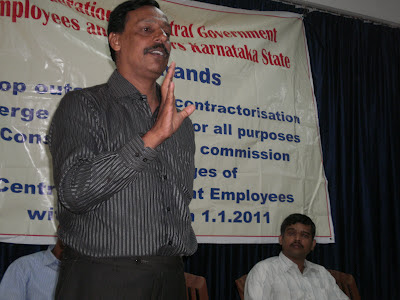 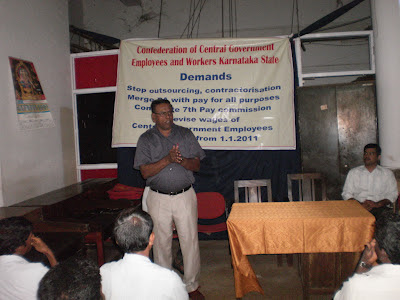 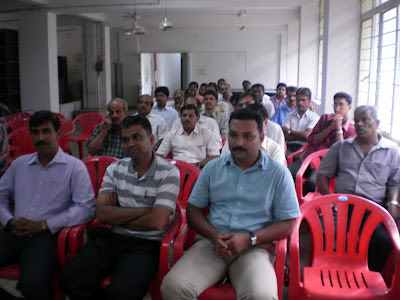 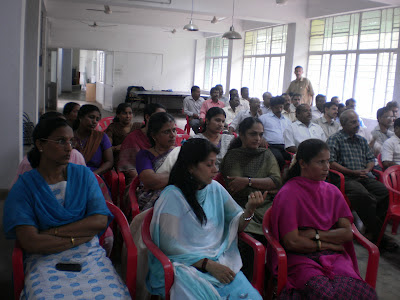 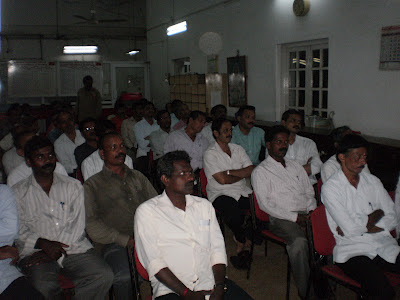 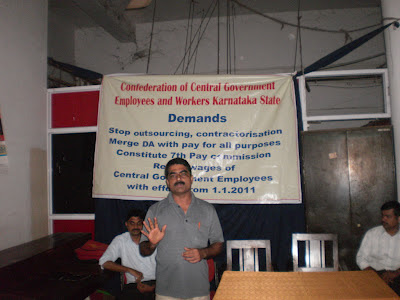 — Relaxation for travel by air to visit J & K


Vote Of Thanks by Com Manjunath President  ITEF Mysore 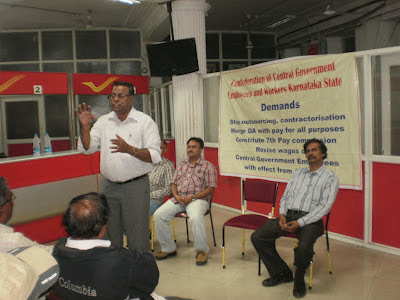 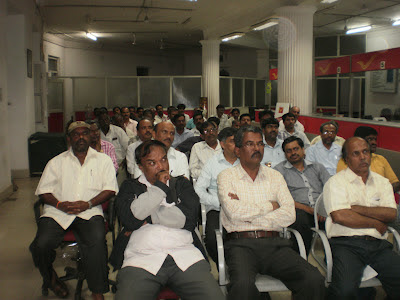 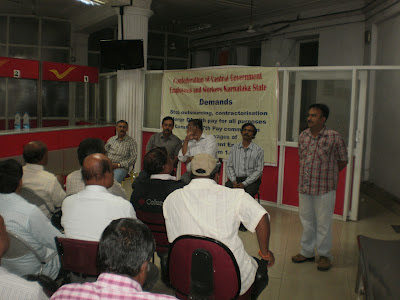 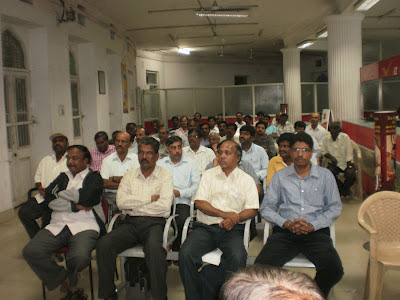 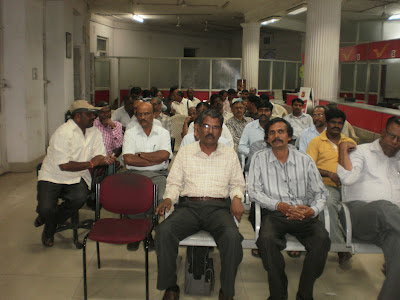 
Vote Of Thanks by Com Vinod Circle Secretary ITEF 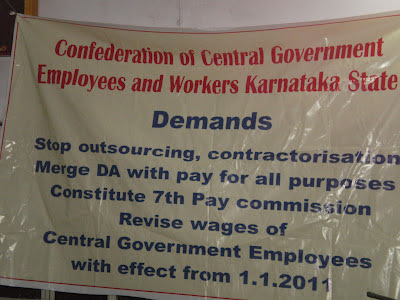 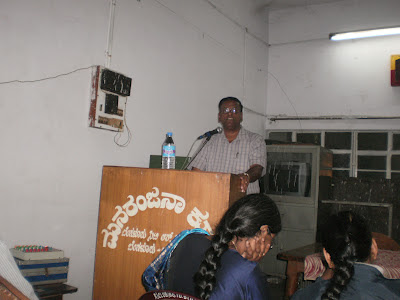 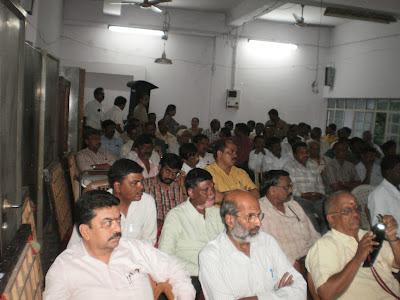 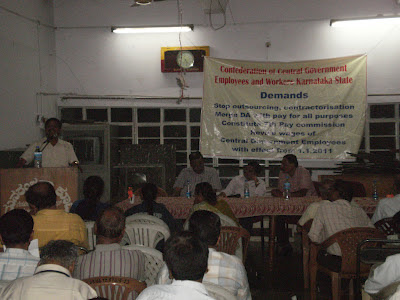 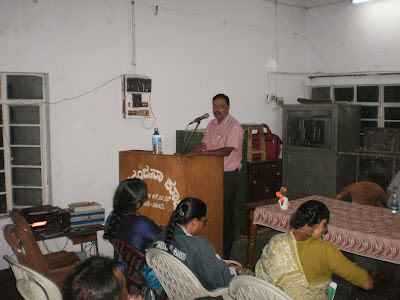 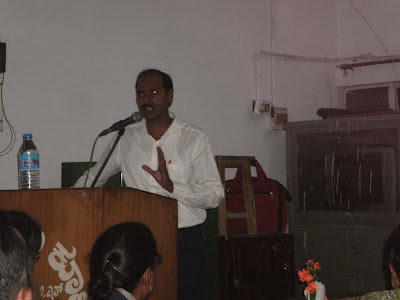 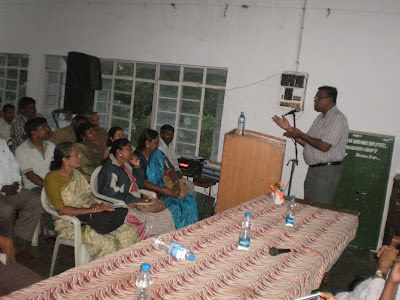 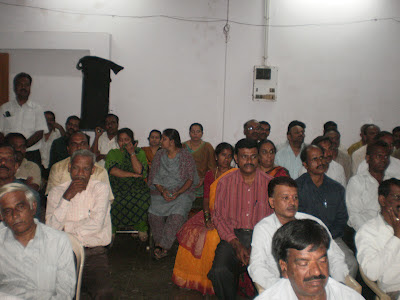 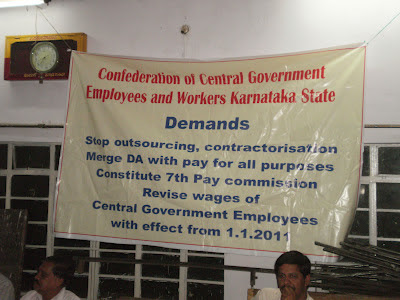 On 7th June 2012 the The Loco Running Staff of SWR and SR took a protest march to CRS office which was flagged off by Com P.S.Prasad General Secretary of COC Karnataka . The COC Karnataka extends its support to ALRSA as the demands raised by it are in the interest of  common public. see Hindu paper dated 8th June 2012 for details

Amid differences among allies, the government on Thursday deferred a decision on the changes in the crucial Pension Fund Regulatory and Development Authority Bill, 2011.

"It (the PFRDA Bill) was taken up and deferred", said a Minister after the Cabinet meeting in New Delhi.
Posted by Karnataka COC- Central Government Employees News at Friday, June 08, 2012 No comments:

The following  decisions was taken.

b) Educate the employees regarding 14 charter of demands. Posters will be prepared and distributed

Economic Measurers To Be Followed

To
All affiliates
COC Karnataka

Comrades,
The Meeting of the COC  Karnataka will be held on 5/6/2012 (Tuesday) at City RMS office  Bangalore at 18.30 hrs to discuss the following agenda.


The below table denotes the calculation for the month of April 2012…
Posted by Karnataka COC- Central Government Employees News at Friday, June 01, 2012 No comments:

The following anomalies are pending and likely to be settled…Pay fixation of promotees at the minimum of the grade at par with Direct Recruits.Treatment of employees selected under LDCE/GDCE at par with direct recruits and their earlier promotions/services rendered should be ignored for the purpose of MACPs as was being done in ACP SchemeTreatment of GP Rs 5400 in PB-2 & GP Rs. 5400 in PB-3 should be treated as same grade pays for the purpose of MACPsStepping-up of benefits to the seniors from their juniorsBenefit of one increment in case of status promotion in same grade pay.Allotment of Grade Pay Rs.4800 to the Supervisors of the apex gradeCounting of training period and abolition of Grade Pay Rs.2000 for the purpose of financial upgradation under MACP SchemeDate of effect of MACPS form 1.1.2006 instead of 1.9.2008 etc.