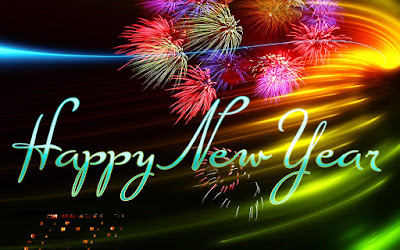 The Lok Sabha on Tuesday passed a bill allowing doubling of wage ceiling for calculating bonus to Rs 7,000 per month for factory workers with establishments with 20 or more workers, with the benefits being applicable retrospectively from April 2014.
Posted by Karnataka COC- Central Government Employees News at Wednesday, December 23, 2015 No comments:

Let us examine the 7th CPC report vide para no 3.65 and 3.66 and the website of Government of India Ministry of Finance Department of Expenditure Pay Research Unit for Brochure on Pay and Allowances of Central Government Civilian Employees visit website : http://finmin.nic.in/pru/BROCHURE/PayAllowance2013-14E.pdf 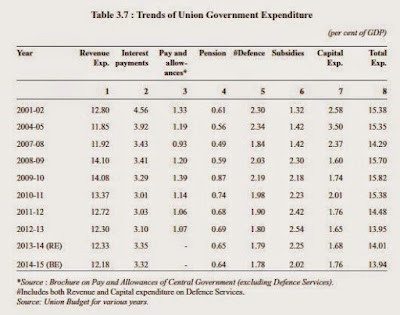 3.65 The total expenditure on pay and allowances for civil personnel of Central Government in the recent years is brought out in Table 9.

Table 9: Expenditure on Pay and Allowances

The Commission has obtained details of expenditure from each ministry/department for up to FY 2012-13. Of the total expenditure on pay and allowances of Rs 1,29,599 crore for the financial year 2012-13.

Total Expenditure for 35 lakhs for Civil Central Government personnel for FY 2016-17 is around Rs 1,83,000 crores In respect of pensions expenditure for 55 lakhs pensioners amount is around  Rs 81,000/ crores as on 1/1/2016. which is against the revenue  receipts of Rs 19 lakh crores. The percentage of revenue receipt and wages is just around 13 % of the total revenue is spent on the wages and pension for the Central Government personnel. In fact it is just at 1.3 % of the GDP.

The 7th CPC recommendations’ impact need not give jitters to the government because the rise in government wages will amount to only 0.4 per cent of GDP.

One more aspect is that technically, the recommendations of a Central Pay Commission are only for Central Government employees and States are not bound to follow suit. Indeed, up to the 1980s, States constituted their own Pay Commissions and prescribed their own pay scales, based upon their fiscal capacity.

Let us not be carried over by the media or press reports, hence we should educate each and every employee for struggle and so that a decent wage hike is achieved.
Comradely yours

The change in nomenclature comes into force with immediate effect.

Comrades ,
The 7th CPC has cheated the 35 lakhs Central Government Employees and 50 lakhs pensioners, by announcing meagre 14.29% wage hike, in actual term of increase for serving employees after deduction of Income tax, enhanced subscription of CGEIS, licence fee, CGHS etc the net increase is actually varies from 1% to 4 % increase.

The similar situation was existing for central Government employees during the 5th CPC , as the 5th CPC had recommended 20% wage hike after strike notice was served then the Third Front Government agreed to provide 40% wage hike, recently the 6th CPC had provided 54% wage hike.This is lowest wage hike by any pay commission.

The Central Government Employees are having 10 years wage revision against the basic principle of 5 years wage revision adopted by all other Government agency such as Banks Employees, PSU employees etc. The bank employees were initially offered around 10% wage hike , after sustained trade union action they got 15% wage hike from with effect from 1st November  2012. Cumulatively it works out to more than 35 % wage hike for 10 years. The AP and Telangana state government employees got recently 40 % wage hike the pay commission of AP had also adopted Dr. Aykroyd formula and 15th ILO norms and fixed at Rs 13,000/- minimum wage as on 1st July 2013 , if we calculate the minimum wage on this basis for the Central Government Employees the minimum wage works out to Rs 25,000/- and fitment formula of  3.57 .

Overall the 7th CPC has erred in calculation of minimum wage for the Central Government Employees there by denying the correct fitment formula and right wage hike. Comrade it is time to mobilize, educate and prepare for trade union action. Like bank employees we should also get right wage agreement.

In Lok Sabha today, the DOPT Minister Shri Jitendra Singhji said that there is no proposal to reduce the retirement age to 58 years of age or 33 years of service for Central Government employees.

In a written reply for the question regarding the retirement age of Central Government employees in Parliament today, the concerend Minster of State for Personnel Jitendra Singhji said that the there is no such proposal to reduce the retirement age with the connection of 33 years of service.
Posted by Karnataka COC- Central Government Employees News at Thursday, December 17, 2015 No comments:

Hold demonstrations on 30.12.2015 in front of all offices and Submit copy of the Charter of Demands to Head of offices for onward transmission to Cabinet Secretary.

NJCA will meet on 8th February 2016 to decide the date of commencement of indefinite strike.

Restriction of Outsiders in Trade Unions
The Ministry of Labour and Employment has taken steps for drafting the Labour Code on Industrial Relations, by simplifying, amalgamating and rationalizing the relevant provisions of the following three Labour Laws:-

The Government carried out the process of Tripartite Consultation for drafting the Labour Code on Industrial Relations, where the representatives from Central Trade Unions, Employers’ Association and Central Ministries/State Governments participated and gave their suggestions. Two such meetings for the tripartite consultation on this Labour Code were held on 06.05.2015 and 06.10.2015.

This information given by Shri Bandaru Dattatreya, the Minister of State (IC) for Ministry Labour and Employment, in reply to a question in Lok Sabha today.