The following demands were included in the Common Charter of demands:

1.    Set up the 7th CPC and frame its terms of reference after consultation with Staff Side.
2.    Merge DA with pay for all purposes.
3.    Scrap the New Contributory Pension Scheme.
4.    Regularize (a) Gramin Dak Sevaks of Postal Department.(b)Daily rated workers , (c) Contract Labourers:
5.    Remove 5% Ceiling on Compassionate appointments.
6.    Settle all 6th CPC anomalies raised in the National Anomaly Committee and implement the Arbitration Awards.
7.    Remove Ceiling of Rs. 3500 on computation of Bonus.

All organizations may include the department –specific and other demands in Part B of the Charter and seek settlement thereof with the appropriate authorities.

The meeting also decided to submit the Charter of demands to the Cabinet Secretary and seek negotiated settlement.

The Council will meet again in the first week of August 2013 to decide upon the date of National Convention and other programmes of action in pursuance of the Charter of demands.

Expected Dearness Allowance due from July, 2013 is 90%.
Posted by Karnataka COC- Central Government Employees News at Friday, June 28, 2013 No comments:

Excessive and unexpected rainfall resulting in furious floods has battered beyond measure, the Himalayan hill state of Uttarakhand.  Whole villages, stretches of roads and communication links have been affected.  More than 1000 persons met with tragic death.  Thousands, including those from other parts of the country who were undertaking pilgrimages to religiously significant temples in the region, remain stranded.  Hundreds of houses and buildings along the banks of Alakananda and the Bhagirathi has been swept away in Rudraprayag district alone.  Thousands have become homeless.
As the magnitude of the tragedy caused in Uttarakhand continues to unfold, Prime Minister Sri. Manmohan Singh has issued an appeal for generous donations to support the victims who have suffered extensive devastation.  Prime Minister appealed that - “At this moment, the affected people need our help to tide over the calamity that has fallen upon them, to survive and to rebuild their lives.  I request all citizens of India to stand with our distressed fellow countrymen, and actively participate in the national effort to support them at this difficult time”.
It is needless to say that the Central Govt. Employees have an urgent and important role to play in helping the flood victims and we shall have to rise upto the occasion, as in the past when such national calamities occurred.  The National Secretariat of the Confederation of Central Govt. Employees & Workers calls upon the entireity of Central Govt. Employees to donate one day’s salary to the Prime Minister Relief Fund and extend our full support to the flood victims to rebuild their lives.
All the Affiliates of the Confederation, State Committees (C-O-Cs) and CHQ Office bearers are requested to make maximum efforts to collect and remit the donations to Prime Minister’s Relief Fund.

We continue to agitate till our 15 charter of demands are implemented by Government of India. 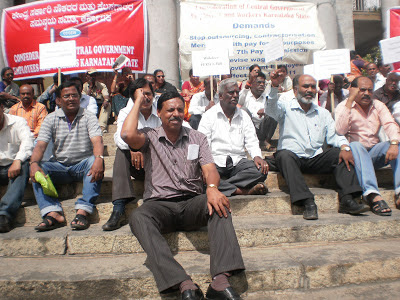 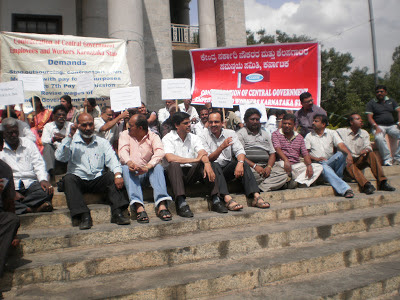 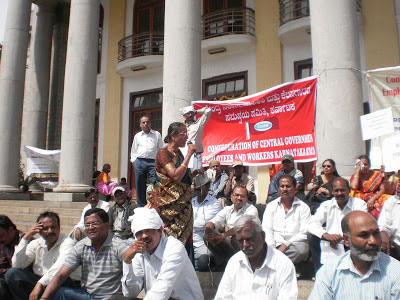 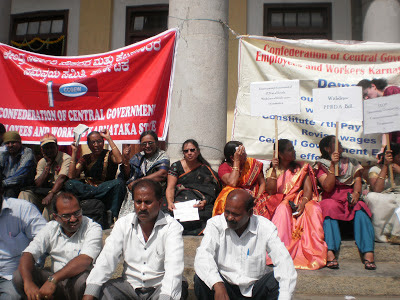 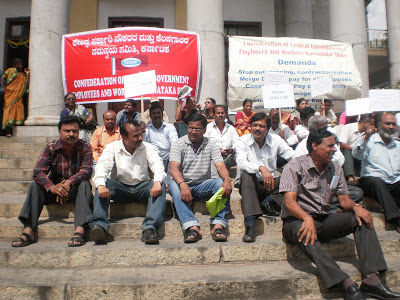 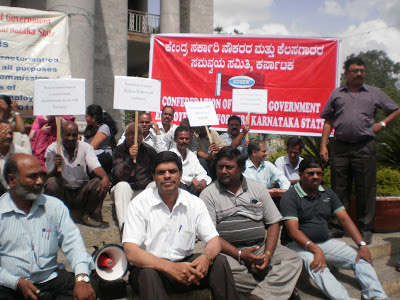 Withdrawal of the PFRDA Bill.

Grant Five promotions to all.

Remove restrictions on Compassionate appointments on par with Railways.

The Meeting of the COC Karnataka held on 13/6/2013 at AG's Office Bangalore under the chairmanship of Com S.Radhakrishna Working President COC Karnataka was attended by the representatives of NFPE, ITEF, AG'S, Survey of India, CGHS, Ground Water.

The Com S.Radhakrishna Working President COC Karnataka welcomed the members for the meeting and explained the agenda and current issues.

Com P.S.Prasad  the General Secretary explained the members the need for 7th CPC and DA merger issues along with other 15 charter of demands and the directions of the Confederation for holding the Dharna  program on 20th June 2013 at all centers.

After discussion it was decided to hold Centralized massive Dharna program in front  of Townhall Bangalore from 2 pm to 5 pm and at Head Post Office at District level demanding  setting up of  7th CPC, DA merger and other 15 charter of demands. Necessary campaign material  will be circulated to all Units / Districts. All units are directed to mobiles  maximum members for the Dharna and giving directions to all units.


Comrade,
The Sixth Central Pay Commission has recommended a minimum wage of Rs 6600/- per month   against the demand of Rs 10,000/-  per month as worked out by Staff side of JCM, Today the minimum need based wage works out to Rs 15,000/ per month+ HRA+ allowances. hence there is  three times increase in actual prices calculated by the 6th CPC and the current prices. The current wages and HRA of the CG Employees should be doubled atleast.

The most comprehensive criteria for covering all the basic needs were evolved by the 15th Indian Labour Conference (ILC) in 1957 for fixing minimum wages.  The norms are that a need-based minimum wage for a single worker should cover all the needs of a worker’s family consisting of a spouse and two children.

The food requirement was to be 2,700 calories, 65 grams of protein and around 45-60  grams of fat as recommended by Dr Wallace Aykroyd for an average Indian adult of moderate activity.  Dr Aykroyd pointed out that animal proteins, such as milk, eggs, fish, liver and meat, are biologically more efficient than vegetable proteins and suggested that they should form at least one-fifth of the total protein.

Dr Aykroyd worked on nutrition for nearly 30 years and was director of the Nutrition Division, Food and Agriculture Organisation, United Nations.  In 1935, he was appointed director of the government's nutritional research centre in India, situated in Coonoor in the south.

The 15th ILC further resolved that clothing requirements should be based on per capita consumption of 18 yards per annum, which gives 72 yards per annum for the average worker's family.  For housing, the rent corresponding to the minimum area provided under the government's industrial housing schemes was to be taken.  Fuel, lighting and other items of expenditure were to constitute an additional 20% of the total minimum wage.

The Supreme Court upheld these criteria in the case of Unichoy vs State of Kerala in 1961. In the later Raptakos Brett Vs Workmen case of 1991, the SC went one step further, and held that besides the five components enunciated by the 15th ILC, minimum wages should include a sixth component, amounting to 25% of the total minimum wage, to cover children's education, medical treatment, recreation, festivals and ceremonies. The SC also observed that a wage structure including the above six components would be “nothing more than minimum wage at subsistence level” which the workers must get “at all times and under all circumstances”.

Minimum Salary-Analysis &Recommendations para 2.2.15
The Commission, however, agrees that the norms set by the 15th International Labour Conference (ILC) are appropriate for computing minimum salary. It is also observed that the minimum salary is applicable at the time a person joins the Government which will usually be at a young age when a person may be just married and will not have responsibility of parents or many children. Accordingly, the family unit for minimum salary can only be taken as three.

COC View:
The Minimum Salary should be based on 6 units not three units as per 6th CPC calculation. As both parents and two children are depending on the salary of Government servant apart from spouse. the additional burden the employees will carry after a few years of service  as his parents would have retired from service and are wholly dependent on him also  his children would have stepped into school / college level,  even small baby requirements are much unlike in the past years, the  hence the minimum wage he gets will not compensate with the family financial burden Hence the whole calculations needs a undergo a drastic change in next CPC taking into account of 6 units rather than 3 units .
Table:
Fixation of Minimum wage as on 1.1.2006 as per 15 ILC norms as per Table 2.2.1 of the 6th CPC report and the minimum wage as per current prices we compare minimum wage should be  three times the 6th CPC recommendations.

Source : Average market rates in Kolkata, Chennai, Delhi and Mumbai as indicated in the Economic Times &
other major dailies (element of 20% has been added to cover the increase in cost in retail sale).
Notes PCU = Per day Consumption Unit 3CU = Three Consumption Units that is wife, husband and a child no parents or second child is taken into account.
* 20% Miscellaneous charges towards fuel, electricity, water etc.
** Additional Expense at the rate of 25% includes expenditure towards education,
medical treatment, housing, recreation, festivals etc.
# Has been taken as Rs.400 because separate allowances for education, medical
treatment and housing exist in the Government. Consequently, only the expenditure
towards recreation & festivals need to be taken in account.
^ Being the license fee chargeable for government accommodation at an average rate of
3% of the basic pay.