The meeting of the Central Trade Unions held on 22nd February 2018 at INTUC Office New Delhi expressed indignation and strongly condemned the Government of the day for their intensified attack on the lives and livelihood of the people and seriously compromising the national interest.

Attack on working class centering around dismantling labour laws designed to completely casualise employment conditions through various routes like amending Contract Labour Act, introducing Fixed Term Employment etc has assumed aggressive height. Further it is noted that the Government is out to erase the public sector from the industrial map of the country.  Specific cases of attack on privatization of railways, opening coal mining to private and foreign companies without any restriction whatsoever, mass scale privatization as well as destruction of defence production network through widespread outsourcing, thereby  dismantling the  almost half of the ordinance factories are some of the examples of the gross anti-people and anti-national actions of the Govt. Accumulation of huge non-performing assets of the public sector banks arising out of pilferage of bank-funds by deliberately defaulting private corporate coupled with recent explosion of frauds with bank fund engineered by the same corporate class is also a reflection of the anti-national act of the Govt indulging and patronizing the same big-business class.

The Central Trade Unions reiterated their utter condemnation against the Union Budget 2018-19 which is basically anti-worker and anti-people in character and engineered a deception on the mass of the people through loud populist slogans without actually making any resource allocation.

The Central Trade Unions denounced the Govt of India’s surreptitious move in postponing the 47th session of Indian Labour Conference, thereby reducing tripartism to a mockery.

CTUOs noted with satisfaction the surging struggles by the working people in different sectors throughout the country, both organised and unorganized.

The workers and federations of coal and transport have been preparing for united industrywide actions to be undertaken shortly. All the Federations of Defence Production workers have jointly decided to go in for nationwide strike on 15th March 2018. Many more sectoral actions are in the offing.

The CTUOs while reiterating their resolve to intensify preparation for indefinite strike in the days to come, calls upon all their constituents and working people in general irrespective of affiliations to jointly observe

ALL INDIA PROTEST DAY ON 15TH MARCH 2018:
·    In solidarity with the striking Defence Production workers against anti-national privatization move
·    Against the Anti-people Deceptive Union Budget 2018-19.

The CTUOs will meet shortly after 15th March 2018 to decide their next course of united countrywide action.

Comrade S K Vyasji, veteran leader of the Central Government Employees and Pensioners. He passed away on February 13, 2015 . Let us remember him on 13th February 2018  by holding the special  meetings and  paying honor for his services . 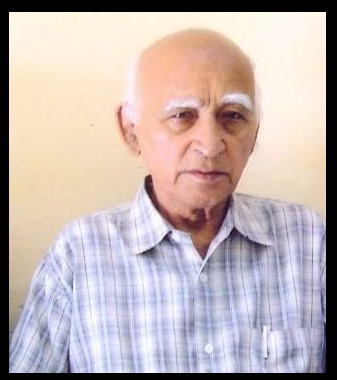 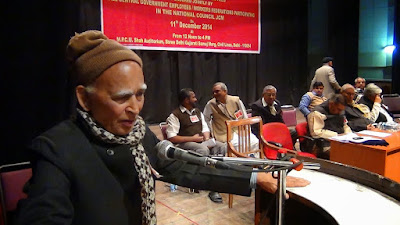 With the passing away of Com. S.K.Vyas on 13th February 2015 , at the age of 86, the Trade Union movement in general and Central Government Employees and Pensioners’ movement in particular have suffered an irreplaceable loss. In whatever capacities this stalwart of Trade Union movement has served an imprint of his personality was indelibly left behind.

When we reminisce the yeoman services rendered by Vyasji, we will be astounded at his encyclopedia and knowledge and erudition in service matters and Trade Union movement. The way in which he drafted Memoranda submitted to the various Pay Commissions was marvelous and even the Chairmen of the Commissions could not find any loopholes or irrationality in them. The vast knowledge coupled with impeccable integrity and peerless courage of conviction and uncompromising nature on principles are worthy of emulation. In agitations he stood like a General at the war front and never negotiated out of fear while he never feared to negotiate.
Let us remember his service to the Central Government Employees and Pensioners’ movement.

Comparison of Minimum Pay of Central Government and a few State Governments as on 1/7/2017.

Pay Commission Objective: It is the endeavour of every pay commission to ensure that the pay and allowances of employees should be ‘fair and reasonable’. The pay structure should also motivate the employees to reasonable levels of performance in the tasks assigned to them, so that the general public derive the benefit of their service as intended.

The Central Government has been following the practice of pay revisionfor employees once in ten years. Pay scales of the Central government employees have been revised with effect from 1.1.2016 based on the report of the Seventh Central Pay Commission. The revised minimum pay effective from 01.01.2016 is 2.57 times the pre-revised basic pay. The minimum pay of the central employees has been worked out at Rs.18,000/- per month and represents a real increase of 14.29% of the pre-revised wages. The multiplication factor adopted for revising all the other scales ranges between 2.57 and 2.72 resulting in maximum pay of  Rs.2,05,400 corresponding to the highest pre-revised pay scale other than the apex pay scale of Rs.80,000 which is raised to Rs.2,25,000. The Cabinet Secretary’s pay is fixed at Rs.2,50,000.

The revised pay structure introduced by the Government of Kerala witheffect from 1.7.2014 is based on the recommendations of the 10th PayRevision Commission and relates to index level of 239.92 points ofAIACPI (IW). Basic Pay of Group “D” employee is fixed at Rs 16500/-

The rates of increment range from Rs.500 to Rs.2,400. The payment of DA formula is unaltered and continues to be as per the central government formula to neutralise the price rise over and above the 239.92 points twice in a year.

The revised pay structure formulated by Government of Andhra Pradeshon the basis of the recommendation of 10th Pay Revision Commissionrelates to index level of 220.61 points of AIACPI (IW), Basic Pay of Group “D” employee is fixed at Rs 13000/-

The HRA ranges from 30% to 12% of basic pay subject to a maximum of Rs.20,000 depending upon the classification of places and pay.

The revised pay structure formulated by Government of Karnataka on the basis of the recommendation of 6th Pay Revision Commission relates to index level of 276.9  of AIACPI (IW).

Costs of consumable items obtained from the Department of Economics & Statistics, Government of Karnataka are utilised for their calculation.

(For English version read from page number 135 on wards)

The 6th pay commission appointed by the Karnataka Government  recommended a 30% increase in the salaries of around 5,20,000 government employees and 73,000 employees from “aided institutions”.

Methodology for calculation of minimum wage adopted by Pay commissions both Central and State Pay Commissions:

Central pay commissions as well as pay commissions in some states have adopted the approach of determining the minimum pay for employees based on the cost of a minimum acceptable standard of living for a household. This is calculated on the basis of the current prices of daily necessities like food, clothing, housing, etc., for a family of three consumption units typical in the case of young employees starting their careers in government. The normative consumption requirements of the family as adopted in the 15th Indian Labour Conference in 1957 are considered for this purpose. While the minimum pay is thus worked out on the basis of a set of quantitative norms and based on Dr. Wallace Aykroyd’s formula , the maximum pay for employees at the highest levels is to be determined as that required to attract and retain persons of qualifications and skills appropriate for the higher positions in government services.

Comparative picture of pay of Central Government and State Government in regards to minimum wage as on  1.7.2017

Ratios between minimum and maximum pay :

The existing ratios between minimum and maximum pay of the central government and the States is as follows:

Abolition of posts of vacant for more than 05 years.

No.7(1)/E.Coord~l/2017
Government of India
Ministry of Finance Department of Expenditure
North Block; New Delhi
Dated, the 16th January, 2018
Office Memorandum
Subject : Submission of Action Taken Report regarding abolition of posts of vacant for more than 05 years.
The undersigned is directed to refer to this Department’s O.M. of even no. dated 17.04.2017 and subsequent reminders of even no. dated 02.05.2017 and 21.07.2017, wherein Financial Advisers of all Ministries/Departments  were requested to submit an Action Taken Report regarding abolition of posts which are vacant for more than 05 years in their respective attached/subordinate/statutory bodies. Some Departments has responded in this regard, but instead of providing a comprehensive report, the requisite information has been provided in piece meal manner.


2.  Therefore, Financial Advisers and Joint Secretaries (Administration) of all Ministries/Departments are requested to identify the posts which are vacant for more than 05 years and submit a comprehensive report of abolition of such posts in main Ministry and their respective attached/subordinate/statutory bodies to this Department  by 25.01.2018.
3.   This issues with the approval of Joint Secretary (Pers.).
(Sobeer Singh)
Under Secretary (E.Coord.I)
Posted by Karnataka COC- Central Government Employees News at Saturday, February 03, 2018 No comments:

The Hon'ble  Union Minister for Finance and Corporate Affairs, Shri Arun Jaitleyji presented the General Budget 2018-19 in the Parliament on 1/2/2018 the following are the highlights.

In respect of 2.5 Crores salaried employees:

Total benefit is only marginal Rs 35/- per year.

Total disappointment for  2.5 Crores salaried employees who were aspiring for the revision of income tax exemption to Rs 4 lakhs. More over  the inflation is at 5% , the salaries are rising due to inflation , the salaried class is paying for inflation and government by way of additional tax  as  the income tax  rebate has  not  been provided in the current general budget 2018-19.  There is need to raise the income tax exemptions and income tax rates as the salaried employees are paying dual tax that is both income tax and GST , the total taxation is working out to about 35 % of  the total salary .  More over hardly about 10% of the country population are paying income tax , there is a need to increase the tax net , to lessen the burden on the existing tax payers.

It is high time the Hon'ble  Union Finance  Minister  gives relief for the 2.5 Crores salaried employees who are paying the taxes.

Exemption of interest income on deposits with banks and post offices to be increased from Rs. 10,000/- to Rs. 50,000/- and TDS shall not be required to be deducted on such income, under section 194A.

The  Hon'ble Finance Minister also announced raising the limit of deduction for health insurance premium and/ or medical expenditure from Rs. 30,000/- to Rs. 50,000/-, under section 80D.

In addition to tax concessions, the Hon'ble Finance Minister proposed to extend the Pradhan Mantri Vaya Vandana Yojana up to March 2020 under which an assured return of 8% is given by Life Insurance Corporation of India. The existing limit on investment of Rs. 7.5 lakh per senior citizen under this scheme is also being enhanced to Rs. 15 lakh.

There is a marginal relief for the Senior Citizens / Pensioners, much more has to be done for these elderly people.