Posted by Minutes of Meeting at Tuesday, September 27, 2016 5 comments:

The total expenditure on Pay and Allowances (excluding Productivity Linked Bonus/ Ad-hoc Bonus, Honorarium, Encashment of Earned Leave and Travelling Allowance) for Regular Central Government Civilian employees including employees of the Union Territories was Rs 139951.93 crore in 2014-15 as compared to Rs 127074.60 crore in 2013-14. Thus, there is an increase in expenditure by Rs 12877.33 crore over previous year which in relative terms works out to around 10.13%.

As on 01.03.2014 the total number of Regular Central Government Civilian Employees in position was 32.24 lakh against the sanctioned strength of 36.46 lakh and approximately 11.57% of the posts were vacant. 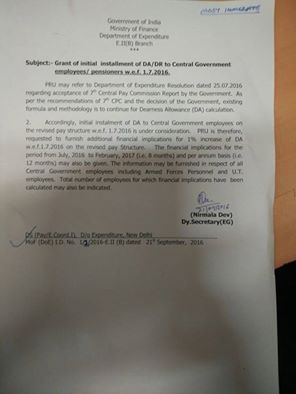 The 22-member panel will be headed by Secretary, Department of Personnel and Training (DOPT) and it will have members from both the official and staff side.

Despite the largesse it gave to its 48 lakh employees and 55 lakh pensioners, at an estimated cost of Rs. 1.02 lakh crore with 23.55 per cent hike in pay and allowances, the 7th Pay Commission continues to be a source of an irritant for the Narendra Modi government as issues on allowances are not settled.

The Centre had set up a ‘Committee on Allowances’ which met last Thursday under the chairmanship of the Union Secretary, Finance (Expenditure), with representatives of government staff unions.

A brief (www.ncjcmstaffside.com) on the meeting the same day by Shiva Gopal Mishra, Secretary (Staff Side), National Council/Joint Consultative Machinery for central employees, shows the unions are getting restive over several issues.

At the meeting, representatives of the unions expressed their anguish over ‘non-formation of a high-level committee’. According to them, it was agreed upon in July by the Group of Ministers for settling the issue of Minimum Wage and Multiplying Factor. The unions want the ‘minimum wage’ for central employees to be fixed at Rs. 26,000 as opposed to Rs. 18,000 recommended by the 7th Central Pay Commission. “The Secretary, Finance (Expenditure), told that, the committee constituted under the chairmanship of Addl. Secretary (Exp.) with J.S. (Pers.), JS (Estt.) and JS(Imp.) as Members has been made only for this purpose. Let us believe that, after the meeting, report of the said committee would be sent to the Government of India for its acceptance,” Mr. Mishra noted.

The unions made a strong case for implementation of the allowances to be decided by the committee from January 1, 2016. Besides, they wanted that House Rent Allowance be fixed at the range of 10 to 30 per cent of the basic linked to the classification of the town of posting, children education Allowance of Rs. 3,000 and hostel subsidy of Rs. 10, 000.

LTC to J&K: Extension of facility to travel by any airlines to visit J&K for a period of two years beyond 25.09.2016

Boost the tourism in the State of Jammu & Kashmir, the LTC Government has decided

Revision of pay of employees stagnating at the maximum of the Pay Band and Grade Pay or scale in pre-revised structure under Central Civil Services (Revised Pay) Rules, 2016