Ministry of Finance, Department of Expenditure vide their OM. No.19030/2/2017-E.IV dated 10th October 2017 has clarified that the ceiling prescribed in para 2E (i) of the Annexure to DoE O.M.No.19030/1/2017-E-IV dated 13.07.2017 in r/o hotel accommodation/guest house, is exclusive of all taxes and these taxes shall be reimbursed to the Govt. Employee over and  above the ceiling limit. 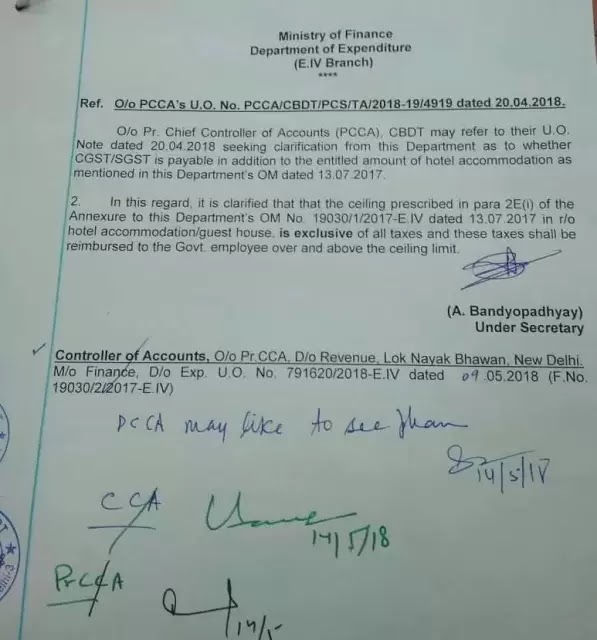 Dated: June 8, 2018
All Members of the NJCADear Comrades,Sub: Holding of meeting of the NJCAIt has been decided to hold meeting of the National Council of Action (NJCA) on 3rd July, 2018 from 16.00 hrs, in JCM Office, 13-C, Ferozshah Road, New DelhiThe following would be the issue of discussion:-(i) To take stock of the current situation in regard to non-settled of major pending issues, viz. improvement in Minimum Wage and Fitment Formula.(ii) No progress in respect of NPS Covered Central Government Employees.(iii) Other pending issues related to National and Departmental Anomalies.All of you are requested to make it convenient to attend the said meeting so as to take the consensus decision for future course of action in the prevalent scenario.With Fraternal Greetings,sd/-(Shiva Gopal Mishra)Convener
Posted by Karnataka COC- Central Government Employees News at Thursday, June 21, 2018 No comments: 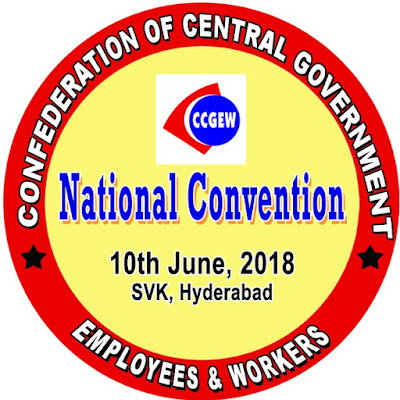 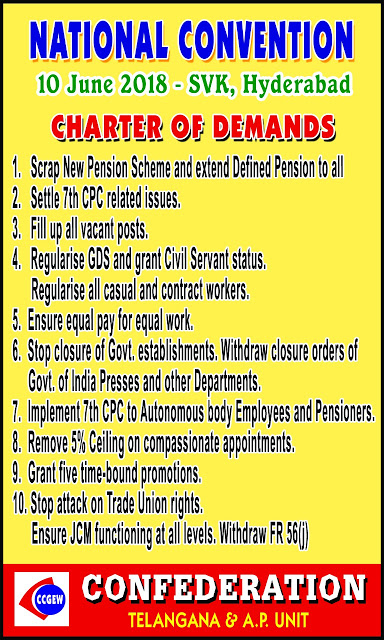 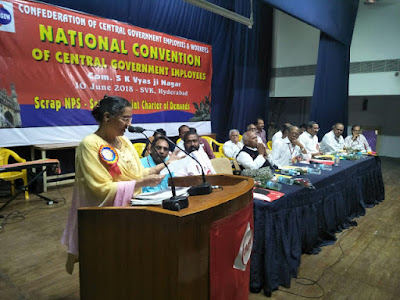 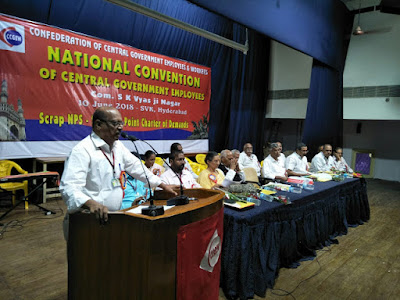 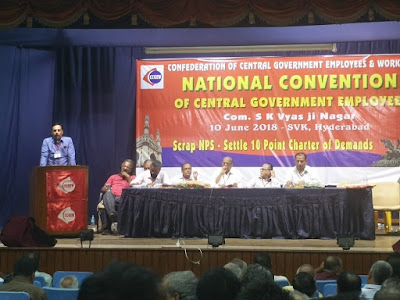 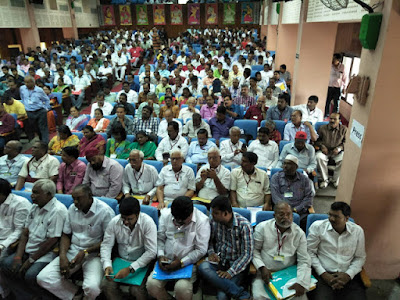 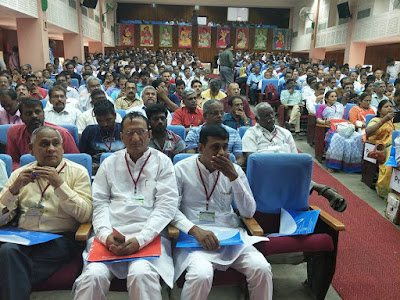 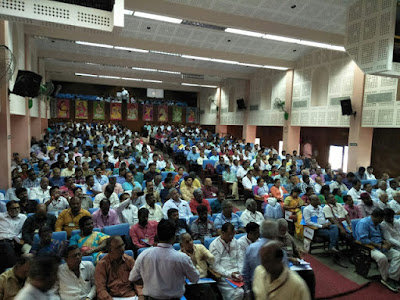 The delegates from  Karnataka state which includes delegates from  Belgavi , Hubli , Bangalore , Raichur districts along with units from  Postal , RMS, ITEF , Survey of India , CGWB , Postal Accounts etc participated in the meeting .

The Reception Committee under the dynamic leadership of Com Nageswara Rao and Azeez along with leaders and cadres of all affiliated organisations of COC made excellent arrangements for the successful conducting of the National Convention. Cultural programmes presented by Praia Natya Mandali was really inspiring. Overall the National Convention was a grand success and and an inspiring experience for those who participated in it.
Posted by Karnataka COC- Central Government Employees News at Monday, June 11, 2018 1 comment:

One minute silence was observed as a mark of honour and respect to our Comrade Chandrashekar, who expired today morning. He was working as a Postal Asst at Bg GPO.  (Ex Sports Inspector and Ex Football Coach).

During the course of the meeting, it was decided that Com.P.S.Prasad, Working President will represent COC karnataka and all other affiliates are required to send their representatives as per the quota fixed by their respective All India Body.

GDS Strike:
The representatives from Postal Assns viz., Com.Javaraya Gowda, Com.Ganesh and Com.Dominic who were present were asked to inform the latest developments reg the ongoing Strike of GDS Employees and also their programme of action, so as to enable COC, Karnataka to extend their solidarity as per the directions issued by Confederation Leadership.

The Union Cabinet chaired by Prime Minister Shri Narendra Modi today has approved the revision in the wage structure and allowances of Gramin Dak Sevaks (GDS) of the Department of Posts.
The revision in the wage structure would entail an estimated expenditure of Rs 1257.75 crore (Non-recurring expenditure - Rs 860.95 crore and Recurring expenditure of Rs.396.80 crore) during 2018-19.
3.07 lakh Gramin Dak Sevaks will be benefitted by this wage revision.
Details:

Implementation strategy and targets:
The revision would result in improving the wages, allowances and discharge benefits of Gramin Dak Sevaks resulting in providing efficient & cost-effective basic postal facilities in the rural area. The proposed increased emoluments will enable him to improve his socio-economic standing.

Impact:
The Branch Post Offices are the fulcrum for provision of Communications and financial services in the village and are located in remote areas. The Post Master has to deal with large sums while making payments to customers; hence accountability is already built into his work. The enhanced remuneration will increase the sense of responsibility. Moreover, with the roll out of the India Post Payment Bank (IPPB), the CDS network is expected to play a key role in the process of financial inclusion of the rural population.

Background:
The Extra Departmental system in the Department of Posts was established more than150 years ago to provide basic, economical and efficient postal services in the rural areas where there was no justification for engaging full time regular employees. One Lakh Twenty-Nine Thousand Three Hundred forty-six (1,29,346) Extra-departmental Branch post offices are primarily manned by Gramin Dak Sevak Branch Postmasters. In addition, Gramin Dak Sevaks other than Branch Postmasters are also working in Branch, Sub and Head Post offices. The main features of the engagement of Gramin Dak Sevaks are that they work for part time ranging from 3 to 5 hours per day and supplement their income from other vocations so as to have adequate means of livelihood for themselves and their families. They remain in service up to the age of 65 years.
****

The All-India CPI-IW for April, 2018 increased by 1 point and pegged at 288 (two hundred and eighty eight).