The preparation for 12th December strike is on the way in Karnataka State with leaders of  Confederation AG's and NFPE visiting the state.

The Karnataka  COC Meeting  was held on 8th August   2012 at Income  Tax Office  Bangalore under the chairmanship  of Com Seethalakshmi  Vice President COC . It was decided to prepare for agitational program as proposed by Confederation.

The COC Meeting was conducted on 18th August  2012 at RMS office which was addressed by Com M.Krishnan Secretary General of NFPE which was attended by leaders of P-3, P-4, RMS, GDS, AG's , Central Excise, Postal Accounts, Ground Water, Survey of India, GSI, P& T audit,  CGHS etc. In which more than 150 members participated.

On 19th August at Gopalpura  Hassan district which was addressed by Com M.Krishnan Secretary General of NFPE, In which more than 200 members participated. & Com. Prasad, General secretary, COC, Karnataka explained briefly about the efforts of Confederation to take the issues of GDS problems along with regular employees issues and also explained why 12-12-12 one day token strike is inevitable to achieve our legitimate demands. Representatives of P3, P4, GDS from Mysore, Mangalore, Kodagu, Hassan, Gulbarga, Raichur, Bangalore, Bellary, Udupi, Koppal, Chikmagalur, etc., are participated, Delegates, Circle Office bearers of GDS NFPE  participated in the meeting.

The COC Meeting was conducted on 27th August  2012 at AG's  office which was addressed by Com M.S.Raja  Secretary General of AG;s and also Secretary of Confederation of CGE   which was attended by leaders of  RMS,  AG's ,  Postal Accounts, Ground Water, Survey of India,  P& T audit,  CGHS etc. This was a leaders meeting.

The General Body meeting were conducted by  Com M.S.Raja  Secretary General of AG's and also Secretary of Confederation of CGE   at AG's on 27th August 2012

The General Body   meeting were conducted by  Com M.S.Raja  Secretary General of AG's and also Secretary of Confederation of CGE at P& T audit office on   28th August 2012

The General Body   meeting were conducted by  Com M.S.Raja  Secretary General of AG's and also Secretary of Confederation of CGE at Ground Water Board  which was also attended by employees of Survey of India on   30th August 2012 .

A few more meetings are taking place in September , already a two page pamplet in dual language is circulated, With these meetings the preparation for 12th Dec 2012 strike has started.
Posted by Karnataka COC- Central Government Employees News at Thursday, August 30, 2012 No comments:

Clarification on the admissibility of House Rent Allowance (HRA) during the Child Care Leave (CCL) – Reg.

STEPS TO IMPROVE PERFORMANCE OF CGHS

Health & Family Welfare Minister Shri.Ghulam Nabi Azad replied in Lok Sabha on 17.8.2012 to the question of 'what action taken by the Government, whether complaints have been received about the dissatisfaction of a large number of Central Government Employees with the services provided by the Government under the Central Government Health Scheme'.
PERFORMANCE OF CGHS
While CGHS endeavors to provide best possible health care facilities to the large number of beneficiaries consulting / visiting CGHS Wellness Centres (approx. 1.2 Crore during the last one year), some complaints are received about unsatisfactory services.
The dissatisfaction relates to shortage of doctors and other manpower resulting in waiting period before consulting doctors, issue of medicines, delay in settlement of medical claims of pensioners, issue of medicines of specific brand, reimbursement at CGHS rates for the treatment taken from unrecognized hospitals, overcharging by empanelled hospitals, opening of new dispensaries, etc.
Government has been receiving increased budgetary support over the last few years to take care of CGHS beneficiaries.
Government has undertaken several steps to improve the functioning of CGHS. These include:
Posted by Karnataka COC- Central Government Employees News at Monday, August 27, 2012 No comments:


To
All Affiliates
COC Karnataka

Comrades,
The Extended COC Meeting will be held on 27th August 2012 at 6.30 pm at  Accountant General's office Bangalore  which will be addressed by Com M.S.Raja Secretary General AG's  and  Secretary Confederation  on 15 charter of demands of the Confederation . All Affiliates are requested to mobilize their rank and file for this meeting.
Comradely yours 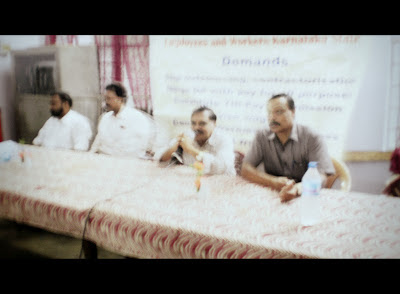 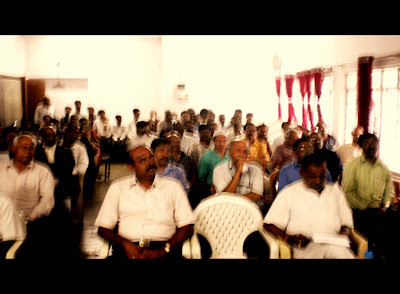 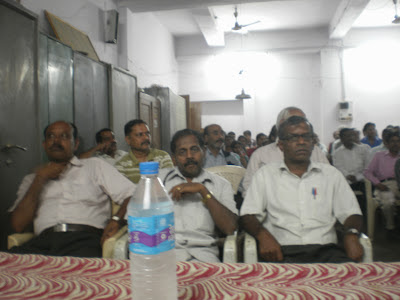 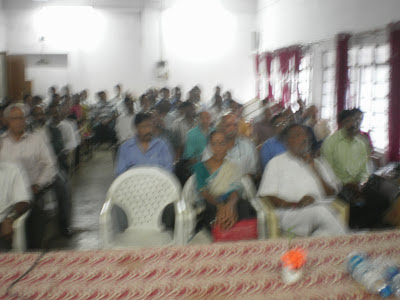 Prepare for General Strike on 12 December 2012

The Rally of Central Government employees from all over the country participating in ‘March To Parliament’ under  the banner of Confederation of CGEs on 26 July 2012 decided to go on one day All India Strike on 12 December 2012 on following demands:

1)Revision of wage with effect from. 1.01.2011 & The Government must set up the 7th CPC immediately.
In Central Government undertaking, Nationalised Banks and Insurance wage revision takes place once in every five years.   The retail prices of those commodities which go into the making of minimum wages have risen by about 160% from 1.1.2006 to 1.1. 2011, whereas the D.A. compensation in the case of Central Government employees on that date had been just 51%,  due to faulty DA formula.
The 6th Central Pay Commission applied a multiplication factor of 1.86 for arriving at the revised pay structure to Group C and D Employees , in the case of Group A Officers, the factor was ranging from 2.36 to 3 times. apply uniform fitment formula for all.
The National Anomaly Committee met 4-5 times, it could not settle any major issues. The MACP, introduced by the Government in replacement of the ACP Scheme already in vogue has not gone to improve the career prospects of the employees due to various untenable stipulations made in the order by the DOPT.
The Grameen Dak Sewaks  should be included in the  7th Central Pay Commission wage review .
The rupee value has gone down from past six years.

2)Merger of DA with pay:
The DA has crossed 72 % as on 1st July 2012, The actual rise in prices are more than 160%, The DA should be merged with Basic pay to protect the employees interest. Today the house rent in market has increased by more than 200% from past six years where as we are compensated only by just  12%.  Only a few allowances are included for 25% increase, If DA is merged then 50% benefit will accrue for all allowances. It is, therefore, necessary that the Government takes steps to merge 50% of DA with pay for all purposes to compensate the erosion of the real value of wages of the Central Government employees including the Grameen Dak Sewaks.

3)Compassionate appointments.
Discrimination between Railways and other Central Govt. employees should be removed, remove ceiling of 5% and assure Govt. jobs for all.

5)Career progression:
The discontent amongst the employees in the matter is of high magnitude today.  It is, therefore, necessary that every Department is asked to undertake to bring about a cadre composition and recruitment pattern in such a manner that an employee once recruited is to have five  hierarchical promotions in his career as is presently the position in the All India Services and in the organized Group A services.

7) Proper functioning of the JCM  and implementation of the arbitration award.

8) Remove the ban on recruitment and creation of posts

10(a) Regularization of daily rated workers.
(b). Absorption of GDS as regular postal employees

11. Introduction of PLB and removal of ceiling limit

Educate the membership about above demands and prepare them for strike to achieve our legitimate demands.
Posted by Karnataka COC- Central Government Employees News at Wednesday, August 15, 2012 No comments:

Comrades,
The Extended COC Meeting will be held on 18th August 2012 at 5pm at  CITY RMS office Bangalore near City Railway station which will be addressed by Com Krishnan Secretary General NFPE and General Secretary COC Kerala on 15 charter of demands of the Confederation . All Affiliates are requested to mobilize their rank and file for this meeting.
Comradely yours

Com Prasad educated the  members on all the 15 Charter of demands.
The following  decisions was taken.

e) The COC Meeting will be held on 18th August 2012 at 5pm at  CITY RMS office Bangalore which will be addressed by Com Krishnan Secretary General NFPE and General Secretary COC Kerala. All Affiliates are requested to mobilize their rank and file for this meeting

It has been decided by the office of PCDA Bangalore, to Issue Individual Plastic Card to all CGHS beneficiaries from 1st August 2012 by CGHS Koramangala, Bangalore. In this connection, the guidelines on Issue of Individual Plastic Cards to each CGHS beneficiary (serving and retired) are revised as follows:
1) CGHS Cards shall be issued only to the eligible Central Government Employees whose place of residence is situated within the coverage area of CGHS.
2) Requisition for CGHS shall be prepared in duplicate in Form “A”.
3) Requisitions for CGHS Cards shall be accompanied by two copies of recent 3X5 cm size individual photographs of all the family members of the government employee. One set of the photograph shall be signed on the back by the concerned beneficiary & enclosed with the application form.
4) Requisitions shall be sent along with two copies of the challan as on Form ‘C’ duly filled in.
5) On the occurrence of death, CGHS Cards issued to the government employee shall be withdrawn for cancellation.
6) In case of change in entitlement for CGHS facilities, the Government employee shall enclose the CGHS Card(s) with the application for Issuing new card(s) with the revised entitlement.
7) In case of mutilation, the mutilated card shall be enclosed with the application along with the challan in token of payment of the prescribed charges for issuing a new card.
8) Duplicate Cards may be issued on payment of prescribed fee with details of lost / misplaced cards.
9) The plastic cards issued by CGHS shall be valid for a period of five years from the date of issue. The validity period shall also be indicated on the card.

The COC meeting will be held on 8/8/12 at ITEF at 18.30 hrs to discuss the following agenda, All Comrades are requested to attend the meeting with out fail

3) Visit of Com Krishnan Secretary General NFPE to Bangalore. on 18/8/12