SUBMISSION OF MEMORANDUM TO CHIEF MINISTER AT 3.30 PM
SUBMITTING MEMORANDUM TO TO HIS EXCELLENCY THE GOVERNOR OF KARNATAKA AT 5PM AT RAJ BHAVAN.

ALL FEDERATIONS ARE REQUESTED TO DIRECT THE LOCAL & DISTRICT UNITS TO PARTICIPATE IN RALLY IN LARGE NUMBERS.
Posted by Karnataka COC- Central Government Employees News at Friday, August 26, 2011 No comments: 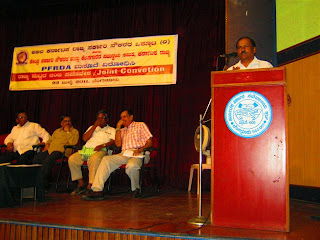 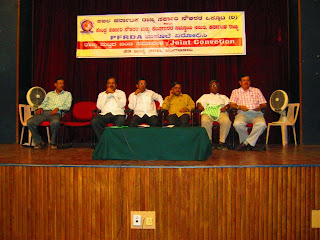 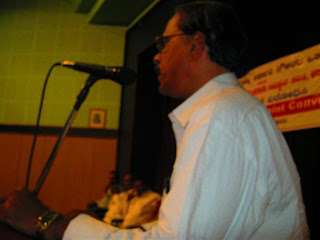 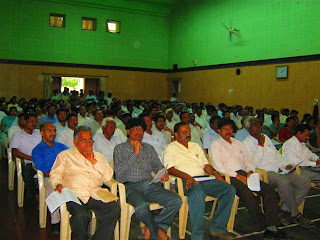 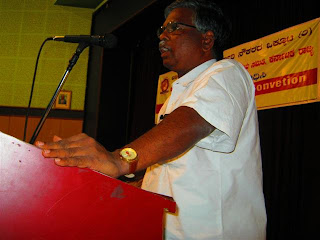 M. K. Pandhe (Madhukar Kashinath Pandhe) (June 11, 1924 - August 20, 2011) was a Politburo member of the Communist Party of India (Marxist) from 2002 [1] and is also the General Secretary of the Centre of Indian Trade Unions (CITU), one of the largest Trade Unions in India. He breathed his last, at Ram Manohar Lohya Hospital, New Delhi at the age of 86.

MANIFEST SOLIDARITY WITH MOVEMENT AGAINST CORRUPTION

Confederation records its deep resentment over the denial of right to organise peaceful agitation against corruption by the Civil Society led by Gandhian Shri Anna Hazare.

This attack is an eye-opener for democratic forces and trade union movement across the country and is a warning to toiling masses that their fight for decent living wages and right to live with dignity would also be met with similarly. Confederation is therefore of the firm view that all employees and workers should protest against this action of the government of denying the constitutionally guaranteed fundamental right to protest peacefully.

Confederation calls upon every government employee to join the protest in their station along with other trade unions and democratic forces against the attack on the right to protest and ensure that such attacks are not repeated. Units of Confederation may arrange protest demonstration in all work places today itself.

Confederation further calls upon every unit to manifest solidarity with the movement against corruption at all levels.
Posted by Karnataka COC- Central Government Employees News at Wednesday, August 17, 2011 No comments:

Withdrawal of the PFRDA Bill,

Merge DA with pay for all purposes including pension as the DA rates crossed the 51% .

All are welcome, Attend in large numbers ,Make this convention a grand sucess

Collect signatures from all ( Friends, Relatives, Govt servants, Employees etc) each employee should collect a minimum of 10 signatures and submit it to Karnataka COC before 1st September 2011, take print out and circulate it.

RMS Employees on Strike at Bangalore

Please extend your support for the RMS Employees of Bangalore on Strike Pl Visit http://nfpe.blogspot.com/ for details of strike, The COC Karnataka extends solidarity with striking employees of RMS, All Affiliates are requested extend their support for the strike.

RMS Strike: DIRECTIONS HAVE BEEN GIVEN TO CPMG KARNATAKA CIRCLE TO DISCUSS THE ISSUE WITH THE STAFF UNIONS TO FIND OUT A SOLUTION.See COC Web site for details

PARLIAMENTARY PANEL RECOMMENDS HIKE IN THE RATE OF GPF

National Secretariat meeting and its decisions.

The meeting of the National Secretariat of Confederation was held at Chennai on 30th July, 2011. Comrade S.K.Vyas President was in Chair. The following decisions were taken.

1. The campaign for popularising the charter of demands adopted at the National Council meeting held at Mumbai on 1st December, 2010 could not be undertaken in an effective manner as the major affiliate NFPE had to be busy with the preparation of the indefinite strike action.

2. The meeting decided that prior to any action programme; an intensive campaign is a pre requisite. Accordingly the following programmes were chalked out.

(a) Every affiliate will circulate the charter of demands along with the explanatory note amongst the employees. Meetings will be organised in front of all offices to explain the demands to the members. Report of such meetings will be sent to the Confederation CHQ directly. These meetings are to be organised between 5th and 10th September, 2011.

(d) All affiliates will organise a department level convention eliciting participation of the State level Executive on a date convenient to them but before 10th October, 2011. One of the National Secretariat members will make it convenient to attend such conventions.

(e) Rally and demonstration will be held in front of the office of the Chairman, Welfare Co-ordination Committee or any other central located place jointly by all the CGEs in all state capitals on 20th October, 2011.

(f) Immediate steps will be taken by all affiliate to circulate the petition to the Prime Minister on PFRDA bill. Copy of the petition will be handed over to each member to obtain his signature as also his family members and friends. The State Committee will hold a review meeting on 10th October, 2011 to monitor the progress and take necessary steps to expedite the campaign.

(g) The National Secretariat will meet at Bangalore on 22nd October, 2011 to review the implementation of the programme of action including the signature campaign and take necessary action to remove deficiencies if any noticed.

(h) The Confederation will mobilise 10000 employees to participate in the ensuing march to Parliament (date will be finalised by the Steering Committee by end of August, 2011).

(i) To organise a day's strike jointly by all the organisations which participated in the 22nd July convention. The date for the strike will be finalised by the steering committee.

The declaration adopted at the convention, the draft letter to the Prime Minister demanding withdrawal of the PFRDA Bill, campaign leaflet on PFRDA Bill are sent herewith. (Copies of the same are also placed on our website).

Points taken up in Confederation meeting at Chennai by Com P.S.Prasad. General Secretary

2) CGHS Ward entitlement as per grade pay instead of basic pay, minimum of semi private ward for all employees.

3) CGHS hosipital rates to be increased

4) Pension cases, Allotment of GPF Numbers to earlier Group ‘D’ , verification of Service books pending in PAO offices due to shortage of staff, more staff to be posted at PAO offices.

The Women committee constituted by the National Women Convention held at Kolkata met at Chennai on 30th July, 2011. The Committee took the following decision. The meeting was presided over by the Chairperson, Com. Geeta Ghoshal and the proceedings were initiated for discussion by Com. C.P. Shobhana, Convenor.

1. To organise the International women's day on 8th March, 2012 at all State Capitals by organising a seminar on the subject "impact of the neo-liberal economic policies on women and women workers in particular"

2. To organise a State level Convention of women employees of the Central Government during September/October, 2011. The State Committees of the Confederation will take necessary steps to hold the convention.

3. To hold a demonstration in a prominent Central Government office by women workers in all State Capitals against the unabated price rise of essential commodities. The date will be finalised and intimated later. Steps will be taken to have massive participation of all women employees of Central Government in this programme by the State Committees.