Almost all Central Government Employees other than Railways are getting Over Time Allowance(OTA) as per pre-revised pay scale only(5th CPC or 4th CPC).

The most comprehensive criteria for covering all the basic needs were evolved by the 15th Indian Labour Conference (ILC) in 1957 for fixing minimum wages.  The norms are that a need-based minimum wage for a single worker should cover all the needs of a worker’s family consisting of a spouse and two children below the age of 14 (considered as three consumption units -- husband: one unit, wife: 0.8 unit and two children: 0.6 units each).
The food requirement was to be 2,700 calories, 65 grams of protein and around 45-60 grams of fat as recommended by Dr Wallace Aykroyd for an average Indian adult of moderate activity.  Dr Aykroyd pointed out that animal proteins, such as milk, eggs, fish, liver and meat, are biologically more efficient than vegetable proteins and suggested that they should form at least one-fifth of the total protein.
Dr Aykroyd worked on nutrition for nearly 30 years and was director of the Nutrition Division, Food and Agriculture Organisation, United Nations.  In 1935, he was appointed director of the government's nutritional research centre in India, situated in Coonoor in the south.
The 15th ILC further resolved that clothing requirements should be based on per capita consumption of 18 yards per annum, which gives 72 yards per annum for the average worker's family.  For housing, the rent corresponding to the minimum area provided under the government's industrial housing schemes was to be taken.  Fuel, lighting and other items of expenditure were to constitute an additional 20% of the total minimum wage.
The Supreme Court upheld these criteria in the case of Unichoy vs State of Kerala in 1961. In the later Raptakos Brett Vs Workmen case of 1991, the SC went one step further, and held that besides the five components enunciated by the 15th ILC, minimum wages should include a sixth component, amounting to 25% of the total minimum wage, to cover children's education, medical treatment, recreation, festivals and ceremonies. The SC also observed that a wage structure including the above six components would be “nothing more than minimum wage at subsistence level” which the workers must get “at all times and under all circumstances”.
The Sixth Central Pay Commission has recommended a minimum wage of Rs 6600/- per month   against the demand of Rs 10,000/-  per month as worked out by Staff side of JCM, Today the minimum need based wage works out to Rs 20,000/ per month.
Posted by Karnataka COC- Central Government Employees News at Monday, October 22, 2012 No comments:

Continuation of empanelment of private hospitals, diagnostic laboratories and imaging centres under CGHS and revalidation of CGHS package rates - regarding. 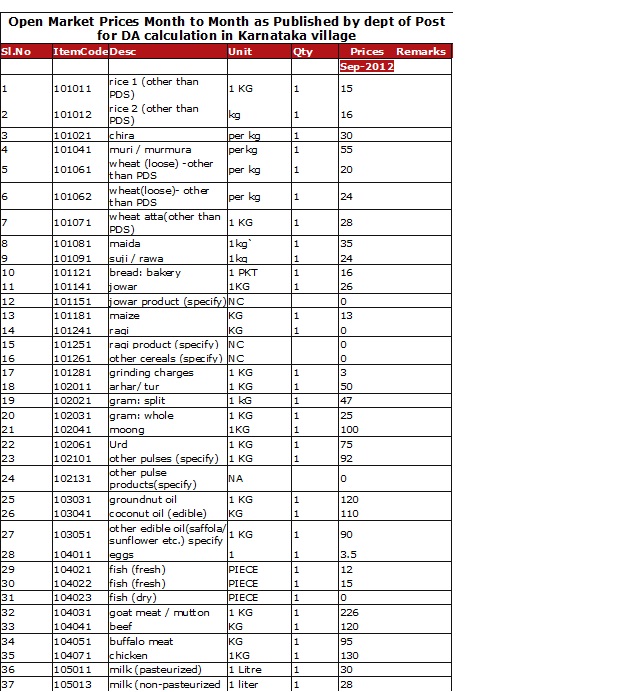