As stocks tumble and bonds recede, NPS funds have churned out losses in the past year and given insipid returns in the long term


Most NPS investors, including the 30 lakh central and state government employees, who are compulsorily a part of the scheme, are SIP investors and their returns should be calculated accordingly. We looked at the SIP returns of NPS funds in the past year and found that most of them were in the red.
The NPS funds for government employees have, on an average, lost 2.45% in the past year. However, you can't blame the downturn in the equity market. Most of the losses are due to the steep 12-15% fall in government bond prices in the past three months. The NPS funds for government employees are allowed to invest up to 15% of their corpus in equities, but no fund has hit that ceiling.
The SBI Pension Fund, the worst performing fund for government employees, had only 6.83% of its corpus in stocks as on 30 June 2013. The UTI Retirement Solutions had only 7.75% in stocks as on 28 March 2013. Both the schemes had almost 50% in government bonds, most of them long-term instruments. The long-term bonds declined steeply in July-August, when the RBI introduced measures to stabilise the rupee.
It is not clear how much the investors have lost due to the equity exposure or allocation to bonds over the past year because the investment mix keeps changing. Besides, not all pension funds have disclosed the portfolios of the schemes they run.
However, the returns of the NPS schemes for the general public offer some clues on how investments have performed in the last one year. The G class funds, which invest only in government bonds, have generated very poor returns (see table). Far from cushioning the portfolio against volatility, the government bonds have infused greater risk in the portfolios. The gilt funds of only two pension fund managers, Kotak Pension Fund and ICICI Prudential Pension Fund, performed better than their equity funds. The SBI Pension Fund's gilt fund has been the worst performer in the past year.
http://articles.economictimes.indiatimes.com/2013-09-09/news/41903687_1_nps-funds-national-pension-scheme-nps-schemes
Source: http://timesofindia.indiatimes.com/business/personal-finance/National-Pension-Scheme-returns-hit-by-downturn/articleshow/22611743.cms 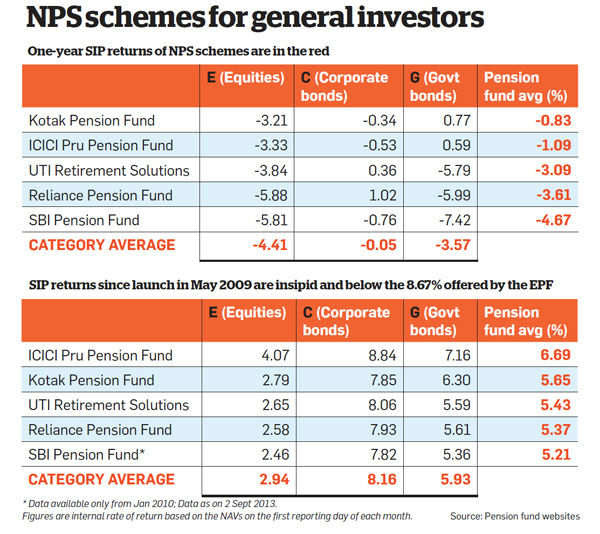 Long-term returns also hit
You could say that one year is too short a duration for judging a scheme in which one has invested for the long term, possibly 20-25 years. However, the downtrend in stocks and bonds has also impacted the long-term returns of the NPS schemes. Though the historical NAV data for all pension fund managers is not available, we managed to get it for UTI Retirement Solutions.
The past fiveyear SIP returns of the pension scheme for central government employees is 6.34%. The 3-year and 4-year returns of the two other pension fund managers (see graphic) are also far below the 8.67% that the Employee Provident Fund has offered.