Comrade,
The fixation of minimum wage as on 1/1/2015 is the ideal one and the date of effect should only be from 1/1/2015 due to following reasons.
The INDIA METEOROLOGICAL DEPARTMENT had predicted 88% rainfall for the year 2014 and for 2015 it is estimated at 93%. The country had reported the Monsoon (rainfall) deficit of 12% last year.  This will impact production of food grains and there will be a price rise of essential commodities especially food articles. Irrespective of whether the monsoon is normal or deficient, food prices are expected to rise in the coming months. With the India Meteorological Department predicting a poor monsoon for the second consecutive year, production could be hit again.
Already the Consumer Price Index inflation for May, also released at the same time, rose to 5 per cent, in line with expectations. However, it was at 4.87 per cent in April. There is once again a upward trend .
Due to adverse weather conditions during the 2014-15 crop season, foodgrain production is estimated to drop 5.3%
In 2013-14, India’s total food grain production was 265.57 tonnes. The Third Advance Estimates for 2014-15 show a sharp decline in production because of deficient rainfall last year.
The output is set to fall to 257.07 tonnes from 265.57 tonnes.
Total production of rice in the country is estimated at 103.04 MT which is lower by 3.61 MT than the last year's record production of 106.65 million tons and the wheat production is expected to decline only marginally  from 95.85 million tons (MT) in 2013-14 to 95.76 million tons (MT) in 2014-15. 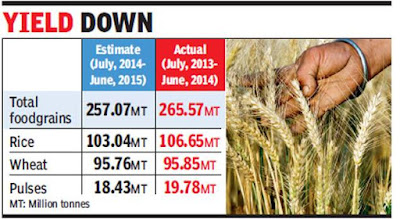 "Production of pulses is estimated at 18.43 million tons which is lower by 1.35 MT than the last year's production. With decrease of 2.92 million tons over the last year's production level, total production of oilseeds in the country is estimated at 29.83 million tons", said the second estimate of the agriculture ministry for the year 2014-15.
Data compiled by the Ministry  of Agriculture show that the prices of pulses had shown a sharp increase in the past few months.
On January 1, the maximum daily retail price of tur dal was Rs. 88 a kg. On April 1, it had reached Rs. 100 and on  June 12th , it had reached Rs. 120.
Similarly, price of urad dal rose from Rs. 90 to Rs. 103 and eventually touched Rs. 123 on 12th June. Pulses are already selling at Rs. 120 to 130 a kg in retail market.
Hence the prices of  food articles will increase in next few months , since the 7th CPC is expected to fix wages as on 1/1/2016,  what ever the 7th CPC calculation of average price rise of  last  years will not hold good as abnormal prices rise is expected . Hence the only solution is to have wage revision taking into the current prices and accordingly the date of effect of 7th CPC should be from the date of prices are take into account for calculation of minimum wage and fitment formula not from 1/1/2016.  So that the wages are revised as on actual  retail price rise.
Source: Times of India
Comradely yours
(P.S.Prasad)
General Secretary
Posted by Karnataka COC- Central Government Employees News at Friday, June 12, 2015